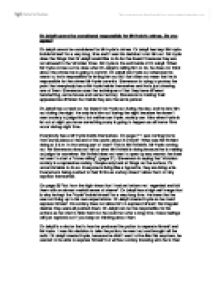 Dr Jekyll cannot be considered responsible for Mr Hyde's crimes. Do you agree?

Dr Jekyll cannot be considered responsible for Mr Hyde's crimes. Do you agree? Dr Jekyll cannot be considered for Mr Hyde's crimes. Dr Jekyll has kept Mr Hyde inside himself for a very long, time and it was his decision to let him out. Mr Hyde does the things that Dr Jekyll would like to do but he doesn't because they are not allowed in the Victorian times. Mr Hyde is the evil inside of Dr Jekyll. When Mr Hyde comes out he does what Dr Jekyll is telling him to do, he does not think about the crimes he is going to commit. Dr Jekyll lets Hyde out whenever he wants to, he is responsible for letting him out but that does not mean that he is responsible for the crimes Mr Hyde commits. Stevenson is trying to portray the point that everybody has a Mr Hyde inside themselves and he is just showing one of them. Stevenson uses the techniques of that they have different handwriting, same house and same memory. Stevenson is making their appearances different but inside they are the same person. Dr Jekyll has a mask on, he doesn't let Hyde out during the day, and he lets him out during the night. ...read more.

Dr Jekyll is not considered responsible for Hyde's crimes here. Dr Jekyll writes "but this danger was easily eliminated from the future by opening an account at another bank in the name of Edward Hyde himself and when by sloping my own hand backward I had supplied my double with a signature". Dr Jekyll was totally aware of that situation, he knew what he was doing and he could have prevented this from happening but he didn't. He still was afraid of what would happen if society found out it was him, so by supplying Hyde with another bank account may make people realise that they are two different people. On page 63 "My two natures had memory in common". Dr Jekyll and Mr Hyde have memory in common; they know when each other are doing what they are doing. Stevenson has made the outside of Dr Jekyll and Mr Hyde different but the inside is the same. Dr Jekyll is responsible for changing the outside of himself into Hyde but they are still the same person inside. Mr Hyde does not know the limitations so he can not be blamed. Dr Jekyll does know of the limitations, but he can't be held responsible for his actions as only society pushes him to do so, therefore Hyde can't be responsible either. ...read more.

He doesn't know whether he should or should not listen to what society I telling him to do. Stevenson has made this story like a case. It is as if we are the jurors and throughout the whole story we get to see the evidence. We do not hear from Mr Hyde as Stevenson wants us to make our own conclusion to the case after seeing all the evidence. "I was in a position to judge of its importance" he is inviting us to judge and he keeps on inviting us to judge throughout the whole story. Dr Jekyll can not be responsible for Mr Hyde's crimes. Society pushed him to do this. Dr Jekyll has tried to fool the society, by slanting his hand in a different way and changing his appearance that it is a different person who is doing all those crimes but it isn't it is him, he is only changing what people see but his memory is still the same. But he can not be held responsible for the crimes. Society has pushed Hyde to go out late at night in the wrong part of town, and it has pushed him to kill a girl. Dr Jekyll can not be responsible for Mr Hyde's crimes as he is not responsible himself. ...read more.