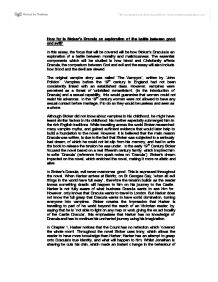 How far is Stoker's Dracula an exploration of the battle between good and evil? In this essay, the focus that will be covered will be how Stoker's Dracula is an exploration of a battle between morality and maliciousness. The essential components which will be studied is how blood and Christianity affects Dracula, the comparison between God and evil and the essay will also include how blood and the devil are viewed. The original vampire story was called `The Vampyre`, written by `John Polidon`. Vampires before the 19th century in England had not been consistently linked with an established class. However, vampires were perceived as a threat of 'unbridled romanticism', (in the introduction of Dracula) and a sexual capability, this would guarantee that women could not resist his advances. In the 19th century women were not allowed to have any sexual contact before marriage, if to do so they would be useless and seen as a whore. Although Stoker did not know about vampires in his childhood, he might have learnt similar factors in his childhood; his mother especially submerged him in the rich English traditions. While travelling across the world Stoker researched many vampire myths, and gained sufficient evidence that would later help to build a foundation to the novel. ...read more.

Dracula has a control over nature. Nature has a way of warning Harker of Dracula and the danger ahead. `...Mountains seemed to come nearer to us on each side and to frown upon us` (Chapter 1, page 9), has you travel more to the east, more warnings try approaching to Harker. Harker describes the darkness as 'closing down upon us'; Stoker uses metaphoric language here to show the power that Dracula has and suggests that he will achieve his goal of world domination. As Harker travels through to the East from the West he soon becomes afraid of the superstitions. This is shown when Harker meets an old lady and gives him a crucifix, which will keep him safe from Dracula. When she hears that Harker is going to visit Dracula, she tries persuading Harker of staying the night with her. The character `Dracula` has control of the East, demonstrated by the fact that the old lady does not continue to say anymore. Blood functions in many ways through out the novel. Blood is first acknowledged in Chapter III, when the Count tells Harker that 'blood is too precious a thing in these days of dishonourable peace; and the glories of the great races are as a tale that is told' (Jonathan Harker's Journal, Chapter 3, Page 26). ...read more.

The Victorian Anglicanism disliked anything which was associated with Catholic rituals and relics, mainly after the Oxford movement's attempt to restore some Roman Catholic practices during the 18302 and 1840s. When Van Helsing enters The Count's Castle, he finds the old chapel, by using Jonathan's journal which has three graves, with the three female vampires in each one. Van Helsing performs a purification ritual and drives a stake through their hearts. Van Helsing finds a grave which is 'more lordly than all the rest', which is Dracula's grave. He crushes a holy wafer and also places holy material, which will prevent Dracula from re-entering the castle again. Stoker's novel has contradicted 'Dracula', for the reason that, in order to have blood, which represented religious symbols, Dracula would need to avoid religion itself. Dracula in some ways could be seen as an ironic character, has religion finally defeats Dracula. Dracula is pro-religious therefore he went against religion to kill his victims. Life is seen as sacred in the Bible therefore Van Helsing goes against religion to kill Dracula with holy wafer and a stake. Has powerful Dracula is, religion can prevent him of victimising his prey. To get rid of Dracula, Van Helsing drove a stake into his heart and chopping his head severely. ?? ?? ?? ?? ...read more.