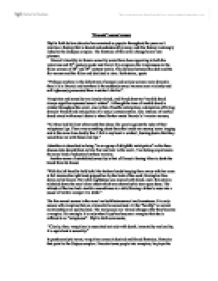 "Dracula"-s****l women Phyllis Roth believs dracular has remained so popular throughout the years as it involves a fantasy that is shared and understood by many, and this fantasy is strongly linked to the Oedipus complex. The fantasies of this novel change horror into pleasure. Dracula's hostility to female sexuality would have been appealing to both the victorians and 20th century reader and Carrol Fry compares the vimpiressess to the fallen women of 18th and 19th century novels. The division between the dark and the fair women and the fallen and idealised is clear. Roth states ; quote "Perhaps nowhere is the dichotomy of sensual and sexless women more dramatic than it is in Dracula and nowhere is the suddenly s****l woman more violently and self-righeously persecuted than in stoker's thriller". Vampirism and sexuality are closely related, and Freud observes "morbid dread always signifies repressed s****l wishes". Although the tone of morbid dread is evident throughout the novel, also is that of lustful anticipation; anticipation of killing dracular himself and anticipation of a s****l consummation. One instance of morbid dread mixed with s****l desire is when Harker meets Dracula's 3 vamire women; "All three had brilliant white teeth that shone like pearls against the ruby of their voluptuous lips. ...read more.

Eveything is as it should be.Yet, the underlying oedipul theme brings out the darkness of the novel. Many of the same characteristics are shared by both the asexual Helsing group and s****l vimpires. As the Helsing group feel overwhelmingly attracted to the female vampires they utilize the defence of denial and project the blame onto the vampires of the females wanting to seduce and kill them rather than the other way round. Religion is often used to justify the actions of murder in the Helsing group, and Roth notes; "The repeated use of the Host , the complicated ritual of the slaying of the vampires, and the ostensible,though not necessarily conscious, renunciation of sexuality are the prnance paid by thoses in Draula who violate the taboos against incest and the murder of parents." The repressed fatasies of the characters are acted out by Dracula himself meaning an identification with the aggressor becomes apparent. The reader can identiy with Harker at the castle as a hero, whose narrative includes the others. This defends us against identifying with Dracula's attacks on women. Both Harker and Dracula are more concerned with the vampiressess than eachother. The women are far more horrible and threatening yet intriguing. ...read more.

Harker describes how Mina has nothing in common with these seductive vimpiresses, when clearly she does as she is no better than them when she draws out the blood from dracula which is necissary for life. Johnathon sees this as an act of castration in his exclaimation, "At least God's mercy is better than that of these monsters, and the precipice is steep and high. At its foot a man may sleep - as a man." Phyllis Roth declares, "the fantasy of incest and matricide evokes the mythic image of the v****a dentata evident in so many folk tales in which the mouth and the v****a are identified with one another by the primitive mind and pose the threat of castration to all men untill the teeth are extracted by the hero." The saving of Mina therefore, becomes equivalent to that extraction. The theme of the need to destroy the threatening yet desirable mother prevails throughout the text. The novel ends in a moral tone, with dracula and lucy destroyed and Helsing and mina saved. Harker finishes on with an ironic note; "This boy will someday know what a brave and gallant woman his mother is. Already he knows her sweetness and loving care; later on he will understand how some men so loved her , that they dare so much for her sake." ...read more.