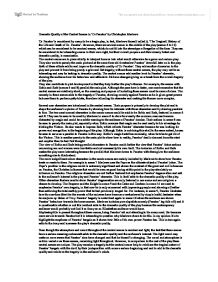 Dramatic Quality of the Central Scenes in 'Dr Faustus' by Christopher Marlowe.

Dramatic Quality of the Central Scenes in 'Dr Faustus' by Christopher Marlowe 'Dr Faustus' is considered by many to be a tragic play, in fact, Marlowe himself called it, 'The Tragicall History of the Life and Death of Dr. Faustus'. However, there are several scenes in the middle of the play (scenes 6 to 11) which can be considered to be comical scenes, which do not fit into the stereotype of tragedies of the time. They can be considered to be interesting scenes in their own right, but their overall purpose and their closely linked end dramatic quality, is examinable. The central scenes are in place chiefly to interject humour into what would otherwise be a grave and serious play. They also work to parody the main plot and at the same time aid foreshadow Faustus' downfall later on in the play. Both of these effects add to and improve the dramatic quality of 'Dr Faustus'. They add another dimension to the play and prevent it from being purely a grim and flat tragedy; without these central scenes, the play may not be as interesting and may be lacking in dramatic quality. The central scenes add another level to Faustus' character, showing the audience how his behaviour and attitude to life have changed giving us a break from the overall tragedy of the play. They also contribute to plot development in that they help further the play's themes. ...read more.

For instance, in scene 9, Faustus illustrates how his one-time thirst for the secrets of the universe have become overshadowed by simple lustful fantasies when he conjures up Helen of Troy. Faustus' tragedy is underlined again in scene 10 when the audience are shown Faustus' behaviour towards the horse-courser. Marlowe includes pure slapstick comedy (Faustus' leg falls off) and it is questionable whether or not this incident adds to the dramatic quality of the play because the contemporary audience would probably not find it as funny as an Elizabethan audience would have. Mephastophilis is present throughout these scenes, being Faustus' aid and attending to his every need. He becomes more servile towards Faustus but it is interesting to question why Marlowe chose to do this. In my opinion it is to highlight the emptiness of Faustus' bargain as it shows how little of his own power Faustus has. This in turn again adds to the irony and increases the play's dramatic quality. Even though the atmosphere and mood throughout the central scenes is comical and light, the fact that these scenes have a serious meaning underneath adds to the dramatic quality and the audience's interest. The light mood may make us more aware that Faustus' aims have changed and that he himself is changing. The mood and atmosphere is not too varied over these scenes, remaining light throughout. However, in comparison to the rest of the play these central scenes are unique. ...read more.

This joke about the Duchess would show that the play had been more thought-out and therefore add to the dramatic quality of the play. Perhaps the scene with the most potential for visual interest is scene 10. In this scene, Faustus tricks the horse-courser, selling him a magical horse. When the horse-courser returns wet and crying with no horse, the audience would find this visually interesting primarily due to the black comedy involved but also because it is a contrast to other events in the play. It is uncertain whether or not the audience would perceive the part of the scene where Faustus' leg falls off as humourous or not, it depends on their view of slapstick comedy in relation to and included in this play. As a part of the contemporary audience, I feel that it is unnecessary and lowers the dramatic quality at this point, however I would think that an Elizabethan audience would disagree. They would be going to the theatre to be entertained, and may have expected some comedy even in a play as tragic as 'Dr Faustus'. In spite of this, I feel that the overall dramatic quality of the central scenes is positive and effectively worked to further Marlowe's themes. One should bear in mind that even though the type of humour that operates in these scenes is not directed at a contemporary audience and therefore they may not find it as humourous as an audience of the time, modern advantages of better props, settings and stage techniques would improve the dramatic quality of the play. ...read more.