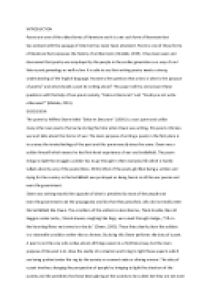 Dulce et Decorum Est by Wilfred Owen and Could You Not Write Otherwise? by Alan Paton.

Ã¯Â»Â¿INTRODUCTION Poems are one of the oldest forms of literature and it is one such form of literature that has evolved with the passage of time but has never been abundant. Poem is one of those forms of literature that surpasses the history of written texts (HorÃ¡lek, 2019). It has been seen and discovered that poetry was employed by the people in the earlier generation as a way of oral history and genealogy as well as law. It is safe to say that writing poetry needs a strong understanding of the English language. However, the question that arises is what is the purpose of poetry? and what should a poet be writing about? This paper will try and answer these questions with the help of two poem namely, â€œDulce et Decorumâ€ and â€œCould you not write otherwise?â€ (Malaba, 2015). DISCUSSION The poem by Wilfred Owen titled â€œDulce et Decorumâ€ (1920) ...read more.

These lines clearly show the soldiers in a miserable condition rather than as heroes. By doing this Owen performs the duty of a poet. A poet is not the one who writes about all things sweet in a rhythmical way, but the main purpose of the poet is to show the reality of a situation and bring to light those aspects which are being pushed under the rug by the society or covered under a shining armour. The duty of a poet involves changing the perspective of people by bringing to light the situation of the society and the problems that have been glaring at the society to be solved but they are not even acknowledged. A poet is not supposed to turn a blind eye to the issues prevailing in the society and right about the scenic beauty when an entire population is suffering due to the societal problems like r****m that has been plaguing the society. ...read more.

This poem was written when division was taking place with respect to the South Africans and the poet effectively channels his understanding of what the people were going through not just physically but even mentally as they had to face an emotional turmoil which was unavoidable. CONCLUSION It can be safely concluded that both the writer Wilfred Owen and Alan Paton serve their responsibilities as a writer. The main purpose of the poem is to bring to the surface what the poets are feeling ad present it to the readers in a way that they understand the entire thing and not just that but also present in a compact manner which is done by both the authors. The poets are supposed to be writing about the complexities and issues of the society rather than turning a blind eye to it. As Owen used accurate word choice and structured the poem well to show his point of view and to show people the truth about the suffering of soldiers. ...read more.