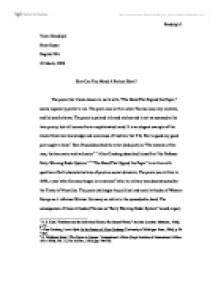 Dylan Thomas' The Hand that Signed the Paper

Victor Randolph Brent Russo English 28A 10 March, 2009 How Can You Mend A Broken Heart? The poem that I have chosen to work with, "The Hand That Signed the Paper," seems especially potent to me. The poem was written when Thomas was only nineteen, and his youth shows. The poem is painted in broad strokes and is not as nuanced as his later poetry, but still comes from a sophisticated mind. It is an elegant example of the kind of historical knowledge and awareness of tradition that T.S. Eliot argued any good poet ought to have.1 Ezra Pound described the artist (and poet) as "The antenna of the race, the barometer and voltmeter" 2 Allen Ginsberg described himself as "the Defense Early Warning Radar System." 3 "The Hand That Signed the Paper" is written with qualities of both characterizations of poets as social detectors. The poem was written in 1933, a year after Germany began re-armament4 after its military was deconstructed by the Treaty of Versailles. The poem challenges the political and social attitudes of Western Europe as it reframes Weimar Germany as victim to the synecdochic hand. The consequence of those attitudes (Thomas as "Early Warning Radar System" would argue) is Germany's rapid reorganization towards Nazism. The content of this poem is of a much greater depth than the form. ...read more.

With that defeat, discourse begins. The second stanza follows the poem's timeline as it moves through the culmination of battle towards post-war diplomacy. The hand is referenced again, emphasizing both its narrative and its connotation. The hand's finger joints are described as being "cramped with chalk." This positions the hand as being after it's drafting of that signed paper. The image of the hand leading to a sloping shoulder and not simply touching, is also ripe with implication. It implies an ignorance of the consequent actions of the body of that shoulder. As if simply; only a slight attempt has been made at rectification. The stanza is closed by the phrase "A goose's quill has put an end to murder / That put an end to talk." There is a concept of war or death putting an end to dialogue present here. This phrase could be a reference to the assassination of Archduke Ferdinand, or could be a reference to war ending the freedom of speech and being a result of the failure of diplomacy. Thomas' use of the "goose's quill" in his poem is an injection of aristocratic and bureaucratic imagery. During this time period, treaties would have most likely been signed using fountain pens, but the poetic treaty is still signed with a goose quill. If the second stanza deals mainly with the drafting and introduction of "the paper." ...read more.

The poem's narrative through battle, diplomacy, aftereffect and chronicle serves to provide a linear temporality to the poem which in turn heightens the poem's effect. To have a recognizable and relatable course of events helps to ground the work in a familiar reality. Thomas is offering a mirror in this poem which Britain and the United States in particular are invited to look into. It is prescient writing for 1933, and Dylan Thomas would have to have been "tuned in" to understand the consequence of history. The further capitulation by Britain to Germany after this poem was written would ignite a Second World War that had already been fueled by two decades of social and economic anxiety. Thomas traces that anxiety to five kings crippling a sixth. An aspect of the poem that I feel I am not capable of doing justice with this particular essay is Thomas' unique use of sound and rhyme. Thomas would become famous for his musicality, and his deft use of that talent in this particular poem elicits a surreal beauty. There are elements of alliteration present as well as a strange yet comfortable meter. It is comfortable in the sense that the rhythm of syllables is never jarring. What I sought to accomplish with this paper was, to provide a meaning and a foundation for the poem. It will have to be someone else's responsibility to dissect every subtle sound and interpret the poem's rolling rhythm. ...read more.