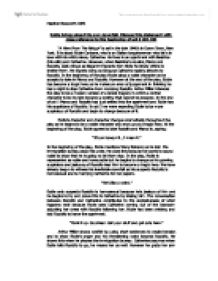 Eddie brings about his own downfall. Discuss this statement with close reference to the beginning of act 2 (43-50) - &quot;A View From The Bridge&quot;.

Eddie brings about his own downfall. Discuss this statement with close reference to the beginning of act 2 (43-50) "A View From The Bridge" is set in the late 1940's in Down Town, New York. It is about Eddie Carbone, who is an Italian longshoreman who falls in love with his wife's niece, Catherine. He lives in an apartment with Beatrice (his wife) and Catherine. However, when Beatrice's cousins, Marco and Rodolfo, seek refuge as illegal immigrants from Sicily he kindly offers to shelter them. He regrets doing so because Catherine rapidly attracts to Rodolfo. In the beginning of the play Eddie plays a noble character as he accepts to take in Marco and Rodolfo. However at the end of the play, Eddie has become a tragic hero as he makes an error of judgement in thinking he had a right to stop Catherine from marrying Rodolfo. Arthur Miller intended the play to be a modern version of a Greek tragedy in which a central character is led by fate towards a destiny that cannot be escaped. In the end of act 1 Marco and Rodolfo had just settled into the apartment and Eddie has his suspicions of Rodolfo. ...read more.

Catherine starts to dislike Eddie when he changes his tone towards Rodolfo and they begin to be violent against each other. Deep down Catherine knows she must stop loving Eddie because of his hate towards Rodolfo and she's afraid of him. "- I like him Rodolfo - and I can't stand it!" Eddie commands Rodolfo to leave, in an angry, aggressive way. He uses short, sour words, which shows his annoyance towards Rodolfo. Rodolfo doesn't react to Eddie's threatening demand as Catherine deals with it by walking toward the bedroom presumably to start packing her belongings. Eddie is confused with Catherine's reaction and grabs her arm and asks her where she's going. Catherine is scared of what Eddie's reaction is going to be when she tells him she has to go too. (Trembling with fear) Catherine's aware of what Eddie is capable of doing so she uses short sentences and has tears in her eyes because she knows what she's saying is really hurting Eddie. (She sees tears in her eyes) Eddie's questions turn to threats as he becomes more insecure. He shows his insecurity by kissing Catherine on the mouth to prove his love for her. ...read more.

Miller constructed the conversation with Alfieri so that the telephone call becomes inevitable, as Eddie knows he has lost Catherine. Eddie decides to deal with this key moment of the play in such a brief and low-key manner as he had been drinking and probably was unaware of what he was saying. He had now assured his own downfall as he knew by having a fight with Rodolfo and kissing him would only lead to more trouble with Catherine. Eddie brings about his own downfall in many ways. Most of them were to do with Rodolfo and him fighting over Catherine. Eddie is responsible for his own downfall because of his love for Catherine. He was also using the accusation of Rodolfo's sexuality to cover up his passion. One of the main points of his downfall was the phone call to the Immigration Bureau. Once he finished the call he had pass the point of no return. The audience's opinion of Eddie at the end of the play was appalling because of what he did just for Catherine and he lost her the one she loved. However Eddie shows his love for Beatrice at the end of the play and proves that he doesn't like Catherine anymore. "My B.," Heather Bosworth 10E2 ...read more.