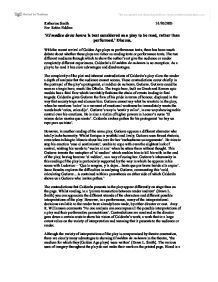 'El medico de su honra is best considered as a play to be read, rather than performed.' Discuss.

'El medico de su honra is best considered as a play to be read, rather than performed.' Discuss. With the recent revival of Golden Age plays as performance texts, there has been much debate about whether these plays are richer as reading texts or performance texts. The two different mediums through which to show the author's art give the audience or reader completely different experiences. Calder�n's El m�dico de su honra is no exception. As a play to be read it has clear advantages and disadvantages. The complexity of the plot and inherent contradictions of Calder�n's play allow the reader a depth of analysis that the audience cannot access. These contradictions occur chiefly in the portrayal of the play's protagonist, el m�dico de su honra, Gutierre. Gutierre could be seen as a tragic hero, much like Othello. The tragic hero, built on Greek and Roman epic models has a fatal flaw which inevitably fashions the chain of events leading to final tragedy. Calder�n gives Gutierre the flaw of his pride in terms of honour, displayed in the way that society traps and silences him. Gutierre cannot say what he wants to in the play; when he mentions 'celos' in a moment of emotional weakness he immediately wants the words back 'celos, celos dije'. ...read more.

Blood is also used with another meaning. When Gutierre marks the doorpost of Mencia's house Calder�n brings into the audience's mind the biblical reference to the angel of death passing over the houses of the first-born Egyptian sons to mark them for death. Gutierre is thus portrayed as playing god and stepping above his human role. On stage, Calder�n can provoke thought in his audience through the use of powerful imagery. The curtain plays a large part in Calder�n's play on-stage. His characters hide behind it to spy on scenes that they are not meant to see or hear. The physical curtain becomes a symbol of silence and concealment, reflecting the codes of society in which silence prevailed at all costs to protect honour. Whilst this is easily depicted on stage, especially in the last scene when the curtain is swept back to reveal Mencia's corpse, and the tragic results of the mistreatment of the silent code of honour, in a book the curtain is not so important. As he reads the reader's mind is not continually assaulted by the physical brutality of the corpse's position on stage, thus reducing tension and emotion. The most important speech in the play is Gutierre's soliloquy in which he invents the metaphor of being a 'm�dico' and finding a 'receta' to cure his honour. ...read more.

Like Gutierre, the audience sees only one point of view and one vision of the play. This makes the experience more vivid, being able to live through the eyes of the protagonist without an overview that could be gained from a reading of the play. If Calder�n's play is seen as a social critique on the role of women in society at that time, or on aristocratic hierarchy, the reader who fully analysed all the nuances and subtleties hidden within the dialogue would gain more from it than the audience who do not have the luxury of time for such analysis. However, if the play is taken as a tragedy, and within that genre a cathartic release of emotions, it needs to be seen in performance to generate the height of intensity and emotion required. Dawn L. Smith highlights the importance of the play's visual requirements 'the murdering husband is the one to engage the spectator's attention, both visually and emotionally', suggesting that in a reading of the play there would exist neither the visual attraction nor the emotion. To fully appreciate the play in its depth and performance art the modern reader needs to consider the play as both a reading and performance text. In this way the reader is both taken into Calderon's world by the performance, undergoing what audiences of the time experienced, and distanced from it on the page, able to see the play in its social and political context. . . Katherine Smith 31/10/2003 For: Robin Fiddian ...read more.