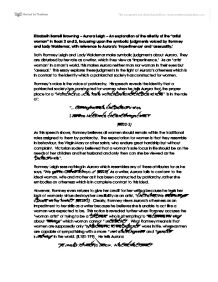 Elizabeth Barrett Browning Aurora Leigh An exploration of the alterity of the artist woman in Book 2 and 3, focussing upon the symbolic judgments voiced by Romney and Lady Waldemar, with reference to Auroras impertinence and asex

Elizabeth Barrett Browning - Aurora Leigh - An exploration of the alterity of the "artist woman" in Book 2 and 3, focussing upon the symbolic judgments voiced by Romney and Lady Waldemar, with reference to Aurora's 'impertinence' and 'asexuality.' Both Romney Leigh and Lady Waldemar make symbolic judgments about Aurora. They are disturbed by her role as a writer, which they view as 'impertinence.' As an 'artist woman' in a man's world, this makes Aurora neither man nor woman in their eyes but 'asexual.' This essay explores these judgments in the light of Aurora's otherness which is in contrast to the identity which a patriarchal society has constructed for women. Romney's voice is the voice of patriarchy. His speech reveals the identity that a patriarchal society has constructed for women when he tells Aurora that the proper place for a "Woman as you are, mere woman, personal and passionate" is in the role of: "... doting mothers, and perfect wives, Sublime Madonnas, and enduring saints! (II.220-3) As this speech shows, Romney believes all women should remain within the traditional roles assigned to them by patriarchy. ...read more.

view, far more important issues in life, but also that all women are incapable of having these feelings which is why he believes women do not make good writers. In Romney's judgment, all women are selfish and not do feel anything for the wider and more important issues. He says that since this is a "world/Uncomprehended" by women, then the world should remain "Uninfluenced" by women. (II.218-20) Since Romney Leigh perceives women to be outside the realm of true human emotion, he even sees them as not human. Indeed, Romney's symbolic judgment of 'women'artists' is that they are like beasts for Aurora is described as "a grand wild creature of the woods," who "hate[s] the stall built for" her. (II.1098/9) In other words, Aurora is like a horse. This b*****l image places Aurora outside of the social norm and implies patriarchy's view of the alterity of the 'woman artist'. In addition, the image of the horse is a very sensual image. In Jungian psychoanalytic symbolism, the horse is linked with human sexuality. It suggests that women who take up the phallic pen and write are guilty of public sexuality and those who indulge in displays of public sexuality lie outside of Victorian society. ...read more.

their otherness, their alterity to society which is uncompromising in its view of the sexes and the roles they are supposed to play. Therefore, as I have shown the alternity of the woman writer is shown through the speeches of both Romney Leigh and Lady Waldemar when expressing their views about Aurora's writing endeavours. A 'woman artist' is working in a man's world. As far as both Romney and Lady Waldemar are concerned this is an 'impertinence' because in Victorian society working as a writer is viewed to be a man's prerogative. Romney believes women do not have the capacity to feel emotion for the wider and more important issues, whereas Lady Waldemar believes Aurora is focussing on her capacity to think, viewed as a male trait, as opposed to feeling, which Lady Waldemar sees as the female trait. Both Romney and Lady Waldemar use b*****l imagery to describe Aurora suggesting she is outside of what is considered normal by Victorian society. Lady Waldemar perceives Aurora as neither man or woman, but as asexual because she appears to embody both sexes in one being. This difference to the norm is what defines the 'woman artist' in her state or condition of otherness. ...read more.