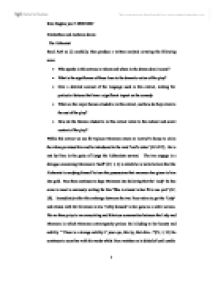 Elizabethan and Jacobean drama The Alchemist Read Act4 sc (i) carefully, then produce a written analysis covering the following areas: * Who speaks in this extract, to whom and where in the drama does it occur? * What is the significance of these lines to the dramatic action of the play? * Give a detailed account of the language used in this extract, looking for particular features that have a significant impact on the comedy * What are the major themes alluded to in this extract, and how do they relate to the rest of the play? * How do the themes alluded to in this extract relate to the cultural and social context of the play? Within this extract we see Sir Epicure Mammon return to Lovewit's house to claim the riches promised him and be introduced to the mad 'lord's sister' (II.3.221). He is met by Face in the guise of Lungs the Alchemists servant. The two engage in a dialogue concerning Mammon's 'stuff' (IV, I, 4) in which he is led to believe that the Alchemist is readying himself to turn the possessions that mammon has given to him into gold. Face then continues to dupe Mammon into believing that the' Lady' he has come to meet is anxiously waiting for him "She is almost in her fit to see you" (IV, I,8). ...read more.

Mammon proposes to woo the Lady with his talk of all the splendour and riches he will soon be in possession of "Now, Epicure, heighten thyself, talk to her all in gold..." (24) It is also evident how Mammon's dreams for material satisfaction make him an easy target, for he is easily duped into handing over more money to Face. He fails to see past his own lustful desires in that he sees only what he chooses to see. He has been told Dol is a noble woman and because this is what he desires he fails to notice that she is no such thing and perceives her to be a 'Lady'." Were there nought else t' enlarge your virtues to me, these answers speak your breeding and nobility" (42). This scene also serves to reinforce our perception of Dol Common. In Act I i it is evident that she is willing to tolerate face and Subtles arguments as a means to an end. She defuses the situation between the two and puts the scam back on track "Will you be your own destructions, gentlemen" (I, I, 106) From her language and actions in previous scenes it is evident that she is cooperative and we can see how she fits into the scams and is used by Face and Subtle as a tool. Here to in Act IV i she is willing to tolerate Mammon's pomposity and delusional fantasies and displays great self control, common sense and intelligence in order to keep the scam ticking along and thus be successful. ...read more.

Also evident is the theme of deception, play-acting and putting on a face, Mammon is being deceived by both Face and Dol. Obviously the theme of alchemy can be seen to be a major theme in both the play as a whole and here in this extract "In the broad sense, alchemy involves the notion of change, and this is seen at all points throughout the play... The victims hope to change themselves...Such a notion of change is, of course illusory: just as lead cannot be changed into gold so, Jonson is saying, man's corruption resists improvement" Bailey C, York Notes The Alchemist Ben Jonson, 2000, Pearson Education LTD. Jonson was keen to expose what he saw as the corruption evident within Elizabethan society. In conclusion it is evident that this Act Iv sc I embroils all the themes alluded to throughout the play. Which in turn serve as an embodiment of Contemporary London society with all its flaws as Jonson saw them. His characters are caricatures; the imagery used a convention to unearth the immoral and debauched bleakness of Elizabethan society. In employing these conventions Jonson was commenting on the state of society and aiming that through satire the audience would relate the play to the times in which they were living. It can be argued that in exposing the foolishness of the characters gulled within the play, driven by greed and of getting something out of nothing he was exposing the greed inherent in the population of London as a whole. Kate Hughes year 3 09/05/2007 1 ...read more.