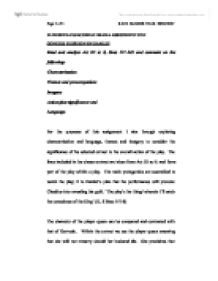 ELIZEBETHAN/JACOBEAN DRAMA ASSIGNMENT ONE CONTEXT QUESTION ON HAMLET Read and analyse Act III sc ii, lines 127-245 and comment on the following: Characterisation Themes and preoccupations Imagery Action/plot significance and Language. For the purposes of this assignment I aim through exploring characterisation and language, themes and imagery to consider the significance of the selected extract to the overall action of the play. The lines included in the chosen extract are taken from Act III sc ii. and form part of the play within a play. The main protagonists are assembled to watch the play; it is Hamlet's plan that the performance will provoke Claudius into revealing his guilt. 'The play's the thing/ wherein I'll catch the conscience of the King' (II, ii lines 557-8) The character of the player queen can be compared and contrasted with that of Gertrude. Within the extract we see the player queen swearing that she will not remarry should her husband die. She proclaims that whilst she is married to him in life so shall she be in death 'both here and hence pursue me lasting strife/ If once a widow ever I be wife.'(223-224). ...read more.

Is there no offence in't?' can be said to reflect that he is trying to justify his marriage to Gertrude. It can in turn also be said to illustrate his growing unease with the way that the plot of the play is unfolding. As the player king is poisoned Claudius rises and leaves calling for lights (244-245) here we can see that the action of the play has stirred his conscience thus revealing his guilt. Again the language used by the Player Lucianus is heightened theatrical language. Rhyming couplets are used to emphasise the melodramatic elements of the play within a play and serve to heighten the reaction of Claudius to the play. Within this extract the most notable element evident concerning Hamlets character is his complete change in demeanour. This is illustrated through the way in which his language can be seen to have changed during this scene. Throughout the play Hamlet's language has been in the form of verse displaying iambic pentameter but here we see a dramatic change in that all his lines within the extract are spoken in prose. ...read more.

The metatheatrical elements also lend themselves to another of the major themes within the play, acting/play acting, the illusion that things are not as they may seem that people take on roles that contradict their true personas. Claudius is now king but he is also a murderer; Hamlet feigns madness. The imagery to be found within this extract also mirrors the imagery used throughout the play as a whole. Within the player's speeches we can see the use of the imagery of nature and decay (line 230-35) line 196). Hamlet uses animal imagery in his line to Claudius (line220) comparing himself to a saddle sore horse. Hamlet also uses s******y crude imagery in his harsh taunts to Ophelia (lines221-230) In conclusion it can be said that the extract has great significance to the overall action of the play. The play within a play is a microcosm of the actual play. Within it we see a parallel or mirror to the main action of the play as a whole. The reactions of Claudius and Hamlet to this parallel action help to move the play along and set up for forthcoming scenes. Page 1 of 5 KATE HUGHES YEAR 09/05/2007 ...read more.