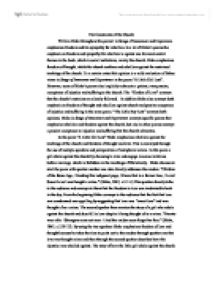 The Constraints of the Church William Blake throughout his poems' in Songs of Innocence and Experience emphasizes freedom and his sympathy for rebellion. In a lot of Blake's poems the emphasis on freedom and sympathy for rebellion is against one his most central themes in the book, which is social institutions, mainly the church. Blake emphasizes freedom of thought, which the church confines and rebellion against the restrained teachings of the church. To a certain extent this opinion is a valid evaluation of Bakes views in Songs of Innocence and Experience in the poem "A Little Girl Lost". However, some of Blake's poems also implicitly advocate a patient, even passive, acceptance of injustice and suffering to the church. The "Garden of Love" conveys that the church's restrains are silently followed. In addition Blake also conveys both emphasis on freedom of thought and rebellion against church and passive acceptance of injustice and suffering in the same poem. "The Little Boy Lost" conveys both opinions. Blake in Songs of Innocence and Experience conveys specific poems that emphasize rebellion and freedom against the church, but also in other poems conveys a passive acceptance to injustice and suffering that the church advocates. In the poem "A Little Girl Lost" Blake emphasizes rebellion against the teachings of the church and freedom of thought and love. ...read more.

The green in this poem is a metaphor for nature and freedom. In the garden the girl has the freedom to love and engage in s****l acts. "Once a youthful pair / Fill'd with softest care / Met in garden bright." (Blake, 1967, a.ll.11-14) However Blake chooses to associate the girl's father with the color white, which acts as a metaphor for God. "O the dismal care! / That shakes the blossoms of my hoary hair." (Blake, 1967, a.ll. 37-38) The green and the white are juxtaposed against each other to show that the girl is closer to green which is freedom and rebels against her father who is associated with white and is a metaphor for God. The father is closer to the God and church while the girl rebels against the church's restrictions. Through the use of multiple speakers and juxtaposition of metaphorical colors Blake conveys his emphasis on freedom of love and thought and rebellion against the church's restrictions. In the "Garden Of Love" however, Blake conveys a passive acceptance to the injustice brought by the church. In this poem similar to "A Little Girl Lost" the freedom to love is being condemned by the Church. But unlike in "A Little Girl Lost" where the girl goes against the church and loves anyways, in this poem there is a passive acceptance to the constrains of the church. ...read more.

"Nor is it possible to Thought / A greater than itself to know: / And Father how, can I love you, / Or any of my brothers more?" (Blake, 1967, c.ll.3-6) However this rebellion leads to the death of the child, because the church burns the boy for loving himself more than god, and not following the teachings of Christianity. The passive acceptance to this injustice and suffering of the boy's death is conveyed through the actions of the boy's parents. Even though the boy is about to be burnt for just having his own thoughts, which is injustice, Blake expresses that the parents of the child do nothing to stop this. "The weeping child could not be heard, / the weeping parents wept in vain:" (Blake, 1967, b.ll.17-18) The parents do not stand up for the child, but instead accept what is going on. Therefore in this poem Blake conveys both rebellion against freedom to think, and passive acceptance of the church's teachings. William Blake emphasizes freedom for thought and love and sympathy for the rebellion against the church in "A Little Girl Lost." He also shows passive acceptance to the injustice and sufferings of the church through "The Garden of Love." Blake also integrates the two opinions in "A Little Boy Lost." These two contradicting opinions are present throughout Songs of Innocence and Experience and it is not possible to conclude which opinion Blake more heavily emphasizes. ...read more.