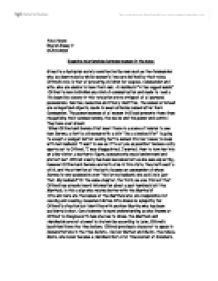 Examine relationships between women in the novel &quot;The handmaids tale&quot;.

Alex Hayes English Essay 2 01/01/2005 Examine relationships between women in the novel Gilead is a dystopian society constructed by men such as the Commander who lay down rules by which women's lives are defined by their roles. Offred's role is that of procuring children for couples, Commander and wife, who are unable to have their own. A Handmaid "A two legged womb" Offred is now forbidden any kind of communication and made to lead a life bound by slavery in this totalarian state stripped of all personal possessions, families, memories and finally identities, the women of Gilead are categorized objects, made to wear uniforms named after their Commander. The powerlessness of all women in Gilead prevents them from recognizing their common enemy, the males and the power and control they have over Gilead. When Offred and Serena first meet there is a scene of tension to see how Serena, a fertile old woman with a chin "like a clenched fist" is going to accept a younger better looking fertile woman into her house to sleep with her husband. ...read more.

Rita shows no sympathy for Offred's situation but identifies with another Martha who has been accidentally shot, Cora however is more understanding as she frowns at Offred to disagree with how she has to dress, the Martha's and Handmaids are not allowed to fraternize according to Luke, Offred's boyfriend from the time before. Offred previously chose not to speak in demonstrations in the time before, like her Mother and Moira, the rebels. Moira, who never became a Handmaid but a full time worker at Jezebel's, to Offred Moira is the embodiment of heroism, a rebellious figure she looks up to. Offred's life is filled with the mundane things which feminist movements, such as the one's her mother was involved in, have tried to make women look beyond. Her role as a handmaid is to wait around until she can do her Commander and his wife 'service'. The waiting and boredom is interrupted by shopping, baths, listening to the Marthas' gossip, whispering to other handmaids and the occasional event of Birth ...read more.

Its isn't what you meant but it exists" Offred learns early on her mother was sent to the colonies for being declared an unwoman. The relationships between Handmaids are very limited, they whisper of a night time and then the only other chances they get to talk are when they shop in couples and at prayvaganzas and salvaging's, but they cannot talk openly, they are being watched by the 'Eyes'. Throughout the whole book only two other handmaids emerge to be individuals like Offred, Ofglen and Ofwarren. Offred knows of Ofglen's life as a secret member of the mayday resistance movement as Ofglen lets her know just after weeks of them being shopping partners, Offred describes her as "voice activated" on "little oiled wheels" basically comparing her to a robot. Ofwarren has to be the unluckiest out of the circle of individuals, raped in the time before and now she has gave birth to a shredder. Serena is glad to see the back of Offred when she is leaving the house towards the end. "b***h," she says "After all he did for you". ...read more.