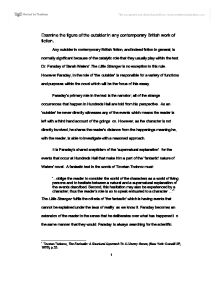 Examine the figure of the outsider in any contemporary British work of fiction.

Examine the figure of the outsider in any contemporary British work of fiction. Any outsider in contemporary British fiction, and indeed fiction in general, is normally significant because of the catalytic role that they usually play within the text. Dr. Faraday of Sarah Waters' The Little Stranger is no exception to this rule. However Faraday, in the role of 'the outsider' is responsible for a variety of functions and purposes within the novel which will be the focus of this essay. Faraday's primary role in the text is the narrator; all of the strange occurrences that happen in Hundreds Hall are told from his perspective. As an 'outsider' he never directly witnesses any of the events which means the reader is left with a third hand account of the goings on. However, as the character is not directly involved, he shares the reader's distance from the happenings meaning he, with the reader, is able to investigate with a reasoned approach. It is Faraday's shared scepticism of the 'supernatural explanation' for the events that occur at Hundreds Hall that make him a part of the 'fantastic' nature of Waters' novel. ...read more.

When this detachment occurs, which inevitably does happen because Faraday is the only character left at the hall at the end, suspicion does fall upon the narrator who for the duration of the novel had occupied the very role the reader now finds themselves in. Todorov states that the fantastic: '...lasts only as long as a certain hesitation: a hesitation common to reader and character, who must decide whether or not what they perceive derives from "reality" as it exists in the common opinion. At the story's end, the reader makes a decision even if the character does not...'5 It is debatable whether or not the reader makes a decision at the end of The Little Stranger; however it is clear that Faraday is still perplexed. The situation is of course complicated by Faraday becoming a suspect in the 'fantastical' occurrences that have gone before. Faraday therefore arguably instead of potentially emerging from the fantastic in the manner the reader is able to do, instead becomes embroiled within the 'fantastic' itself. Part of the reason why Faraday becomes the object of suspicion is because of his desire to own Hundreds and ascend above his class. ...read more.

The choice of 'Dr. Faraday' as a name is significant in its meaning. A doctor is in some ways always an 'outsider' as their independent opinion is always sought. Walter's never reveals Faraday's first name, meaning that there is always a forced formality between him and the other characters. The choice of 'Faraday' is also interesting as it almost certainly is a reference to Michael Faraday. Michael Faraday was a scientist who was renowned for his work using conductors. By calling the character 'Faraday' Walters is likely implying that the doctor is a conductor for all of the supernatural events that occur within Hundreds Hall. In this case of an 'outsider' they virtually have what they want- to be let inside. However, Faraday's 'inside' is superficial. With the Ayres family having been deposed of, he is inside but only on a literal level. Characters like Faraday are always going to remain on the 'outside' because of the catalytic effect that they bring with them. In his attempts to integrate into Hundreds Hall Faraday destroys all that was 'inside' meaning that even though he has crossed the threshold he remains 'outside' and alone. ...read more.