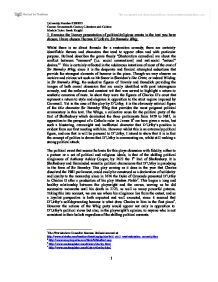 Examine the literary presentation of political/religious events in the text you have chosen. I have chosen Thomas D'Urfey's, Sir Barnaby Whig.

1. Examine the literary presentation of political/religious events in the text you have chosen. I have chosen Thomas D'Urfey's, Sir Barnaby Whig. Whilst there is no direct formula for a restoration comedy, there are certainly identifiable themes and characters that tend to appear often and with particular purpose. Holland describes the genre thusly "[Restoration comedies] are about the conflict between "manners" [i.e. social conventions] and anti-social "natural" desires."1 This is certainly reflected in the adulterous intentions of most of the cast of Sir Barnaby Whig, since it is the desperate and farcical attempted seductions that provide the strongest elements of humour in the piece. Though we may observe an incisive and vicious wit such as Mr Sneer in Sheridan's The Critic, or indeed Wilding in Sir Barnaby Whig, the seductive figures of Townly and Benedick providing the images of both carnal obsession that are easily identified with post interregnum comedy, and the enforced and constant wit that was served to highlight a return to aesthetic concerns of taste. In short they were the figures of Charles II's court that represent a return to style and elegance in opposition to the strict regime imposed by Cromwell. Yet in the case of this play by D'Urfey, it is the obviously satirical figure of the title character Sir Barnaby Whig that provides the most poignant political commentary in this text. ...read more.

However I think that this is merely a factor in the plays comedic value, Whigg's arrest is funny purely because of the speed of his conversion, and then the equally swift acceptance of his impending death. That he will die is a point of information, not a dramtic or humourous event. D'Urfey tries and succeeds in disrupting our expectations of what a comedy should be. The expectations that we develop for this piece begin with the prologue, an essential dramatic tool in this particular piece since it serves to bring the audiences attention not only to the goal of the play, but also highlights the fact that the views being expressed are D'Urfey's, bringing all acclaim and political affirmation back onto his own head. The passage describes the turmoil that exists in England at the time, "Distraction rages now, and th' frantick town, / plagued with sham-plots, a very Bedlam's grown."(Prologue)8 This responsibility for this loss of reason, of wit and intelligence, is placed firmly on the shoulders of mistrust and disloyalty, that the climate of England is rife with discord due to the constant plotting of its citizens, and the paranoia which that evinces, either in response to foreign threats "for fear the French should come and eat them up", or in the fractious religious climate, "Protestants that rail and grieve ye...think all the Loyal Party Dogs and Bears/Run mad"(Prologue)9. ...read more.

It is this suggestion that the future may be a time when there will be impartiality, and that at that point she will have authority and control. As it stands, she has neither and so the play ends on what feels like a weak point until you realise that she represents the artistic or creative urge, unfettered by politics that is currently constrained by the social structure of the time. In conclusion we can see that D'Urfey has used satire and incisive wit on behalf of his 'heroic' characters to ridicule what can easily be construed as his political enemies, considering his loyalty and close relationship with Charles II. However whilst the force of his vitriol is most definitely focussed on Whigg and what he represents, it would appear that he is trying to eliminate this from the audience's mind when they come to see a play. Hence the marginalisation of Whigg's role in the play, and the entreaty in the prologue and epilogue to the audience to keep a degree of political distance when observing his work, hoping no doubt that in the future, hopefully lest tempestuous political climate, drama will be able to return to a position outside of parties and sides. Considering the climate it was written in however it is no surprise that D'Urfey comes down hard on those opposed to the King, and still begs the favourable indulgence of his patron. ...read more.