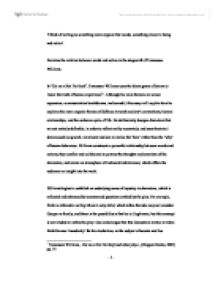 'I think of writing as something more organic that words, something closer to being and action' Examine the relation between words and action in the stagecraft of Tennessee Williams. In 'Cat on a Hot Tin Roof', Tennessee Williams uses the direct genre of drama to 'snare the truth of human experience1'. Although his main themes are s****l repression, communication breakdowns, and scandal, this essay will explain how he explores the more organic themes of defiance towards society's conventions, human relationships, and the uroboros cycle of life. He deliberately designs characters that are not entirely definable, in order to reflect reality accurately, and uses theatrical devices such as speech, movement and set, to realise the 'how' rather than the 'why' of human behaviour. Williams constructs a powerful relationship between words and actions; they conflict and collaborate to portray the thoughts and emotions of the characters, and create an atmosphere of awkward ambivalence, which offers the audience an insight into the work. Williams begins to establish an underlying sense of mystery in characters, which is reflected and enhanced by unanswered questions evoked by the play. For example, Brick is referred to as Big Mama's only child, which infers that she may not consider Gooper as family, and there is the possibility is that he is illegitimate, but this concept is not alluded to within the play. ...read more.

Williams constructs this confusion, through conflicting actions and words, as a possible explanation for the tension within this relationship and others within the work, but also to intensify the ambiguity - as even the playwright may not have made a concrete conclusion -, while exploring the pressure of social conventions. The characters in 'Cat on a Hot Tin Roof' rebel against their traditional roles within society and within a family. Williams communicates a virtue in the characters' inability to be categorised, one example is Big Mama's remark to Maggie in the First Act: Big Mama: Something's not right! You're childless and my son drinks! [Someone has called her downstairs and she has rushed to the door on the line above. She turns at the door and points at the bed] - When a marriage is on the rocks, the rocks are there, right there! (Cat on a Hot Tin Roof, I, 1-4) Big Mama's words are strongly exclaimed accusations are undermined by her flustered and 'rushed' movement. Williams uses the repetition of 'right there', and the excited pointing to solidify her conviction, but the image 'on the rocks' with its connotations of his alcoholism and its multifaceted explanations, is ironical as it reflects Big Daddy's words when he tells Brick not to 'throw rocks' by jumping to conclusions. ...read more.

This aspect of inevitability is relevant to other certainties in the play. For example, the audience are aware that Mae and Gooper are plotting something concerning Big Daddy's death, initially through Maggie's implication, and then by her recreation of their hushed signals at the dinner table, which are later repeated before they inform Big Mama of his true health issues and produce plans to take over the estate. The couples' behaviour, the repetition of 'cancer' and its conflicting definition, the 'spastic colon', collaborate with the troubled expressions and Big Daddy's visual physical pain, insinuate his pending death. It has been established that a close relationship exists between Williams' use of words and actions for his effective and evocative stagecraft. He uses theatrical devices such as setting, to construct an isolated representational stage that expresses and influences the attitudes and emotions of the characters, while providing an insight into events and aid this sense of inevitability. He couples the devises with speech and movement that cooperate and conflict to reveal the characters' attitudes and intentions, in order to explore relationships, social conventions, the cycle like nature of life, and produce a realistic depiction of 'human experience'. ...read more.