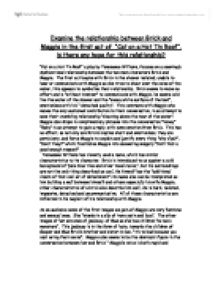 Examine the relationship between Brick and Maggie in the first act of &quot;Cat on a Hot Tin Roof&quot;, is there any hope for this relationship?

Examine the relationship between Brick and Maggie in the first act of "Cat on a Hot Tin Roof", is there any hope for this relationship? "Cat on a Hot Tin Roof" a play by Tennessee Williams, focuses on a seemingly dysfunctional relationship between the two main characters Brick and Maggie. The first act begins with Brick in the shower isolated, unable to hear or communicate with Maggie as she tries to shout over the noise of the water, this appears to symbolise their relationship. Brick seems to make no effort and is "without interest" to communicate with Maggie, he seems cold like the water of the shower and the "snowy white surface of the bed", emotionless with his " detached quality". This contrasts with Maggie who makes the only sustained contribution to their conversation, in an attempt to save their crumbling relationship "shouting above the roar of the water". Maggie also drops in complimentary phrases into the conversation "honey" "Baby" in an attempt to gain a reply, with some emotion from Brick. This has no effect, as not only are Brick's replies short and emotionless, they are pernickety, and force Maggie to explain and justify every thing "why d'ya?", "Don't they?" which frustrates Maggie into answering snappily "Isn't that a good enough reason?" ...read more.

drops his eyes to my b***s an' licks his old chops! Ha ha!". All of these themes covered are what Tennessee Williams may have been describing when he used the word anxious to describe Maggie in the first sentence of the play "A pretty young woman, with anxious lines in her face," Maggie's love for Brick is rarely in doubt as her emotions can suddenly change just by the sight of him "Scream, monsters! [Turns to Brick with a sudden gay, charming smile". But this is in vain as "she notices that he is not looking at her" Brick is more interested in "but into fading gold space" this symbolises his lack of interest in Maggie and their relationship. Maggie's constant effort to keep the relationship going and being disappointed has turned her bitter "It is the constant rejection that makes her humour "bitchy".". Until now Brick has been uncooperative towards Maggie but has not shown hatred "He is watching her with a look that is not quite definable.- Amused? Shocked? Contemptuous?" but this is not all "part of those and part of something else.]" this could be hatred towards Maggie. Maggie has certain characteristics which could be described as animalistic, "hand fluttering at her throat and her b*****s and her long throat arched." ...read more.

This may be why she may have drawn her to loving a man who would not love her back "Living with someone you love can be lonelier - than living entirely alone! - if the one that y' love doesn't love you....". Tennessee Williams ends the first act in a crucial moment of uncertainty in the relationship between Brick and Maggie, to build tension and to keep the audiences attention. Tennessee Williams leaves it to Brick's last words, to undermine what has been leading to Brick and Maggie resolving their conflict. As Maggie says "there is no reason why we can't have a child" Brick alters the mood by leaving the end of the act on a cliff hanging uncertainty, with the words "But how the h**l on earth do you imagine - that you're going to have a child by a man that can't stand you?". This is said as Brick is about to be rescued by the oncoming cavalry in the form of the family "Here they come!". The intrigue in the relationship is what Tennessee Williams uses to keep the interest of the audience for act two, but who will be the stronger partner? Tennessee Williams leads us to believe that it will be Brick as he suddenly is portrayed as possibly being in control of the relationship. Maggie will survive so long as she can stay on "the Hot Tin Roof". ...read more.