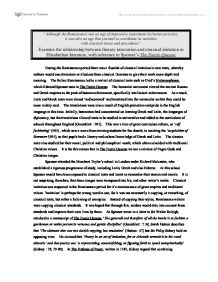 Examine the relationship between literary innovation and classical imitation inElizabethan literature, with reference to Spenser's The Faerie Queene

"Although the Renaissance was an age of impressive experiment in literary practice, it was also an age that yearned to coordinate its activities with classical tenets and procedures" Examine the relationship between literary innovation and classical imitation in Elizabethan literature, with reference to Spenser's The Faerie Queene During the Renaissance period there was a flourish of classical imitation in new texts, whereby authors would use characters or allusions from classical literature to give their work more depth and meaning. The Italian Renaissance led to a revival of classical texts such as Ovid's Metamorphoses, which Edmund Spenser uses in The Faerie Queene. The humanist movement viewed the ancient Roman and Greek empires as the peak of human achievement, specifically intellectual achievement. As a result, Latin and Greek texts were almost 'rediscovered' and translated into the vernacular so that they could be more widely read. The translations were also a result of English patriotism and pride in the English language at this time. Initially, humanism had concentrated on learning Greek and Latin, the languages of diplomacy, but the translations allowed texts to be studied in universities and added to the curriculum of schools throughout England (Greenblatt : 505). ...read more.

Very often the reader is confused as to whom the poet is referring to, the passages of dialogue can be disrupting and the digressions within the text, especially lengthy descriptions can make The Faerie Queene hard to follow. As Heale summarises, 'complexity and, on occasion, mystery are deliberately sought effects in The Faerie Queene. The poem presents the reader with an experience in some respects analogous to that of the knights, who must achieve their ends in a confusing world of sudden appearances and disappearances, in which the correct interpretation of events is often unsure.' (Heale : 12) Spenser was also trying to recreate the form of an 'epic' poem when writing The Faerie Queene. This was in common use in the classical texts, such as Homer's Iliad and Odyssey and Virgil's The Aeneid. Traditionally, the epic contained long narratives detailing heroic acts and battles, especially events significant to a culture or nation. Although Spenser includes heroic acts; the national pride is not seen so clearly. Instead he attempts to portray more Christian values about how to live a virtuous life, so to this extent we can consider this Spenser's attempt at literary innovation. ...read more.

It is possible, of course, that Spenser was purposely trying to create something very different with The Garden of Adonis, which perhaps he thought would get him noticed by the court. Spenser was not from a wealthy background and relied on charity payments to fund him through his schooling. Perhaps, then, Spenser was trying to create a combination of classical imitation and literary innovation in order to earn himself some money? 'The success of The Faerie Queene owes much to the fact that the poem is a generic hybrid, in which the conventions of the classical epic mingle with those of romance, medieval allegory, pastoral, satire, mythological narrative, comedy, philosophical meditation, in a strange wonderful blend' (Greenblatt : 505-6) In conclusion, therefore, Spenser combines classical imitation and literary innovation to create The Faerie Queene. Whether the classical influences were conscious, such as the use of Pagan Gods and their associations, or subconscious, such as images from texts he may have studied2, these serve to illustrate the purpose for which Spenser wrote his epic poem. Despite conspiracy theories that Spenser copied passages from Marlowe's Tamberlaine, it is clear that he spent a long time composing and perfecting The Faerie Queene for his audience, to suit both the expectation of classical imitation, and the need for innovative material. ...read more.