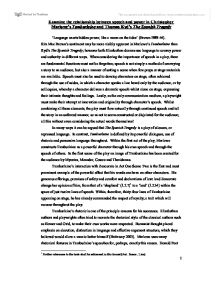 Examine the relationship between speech and power in Christopher Marlowe's Tamburlaine and Thomas Kyd's The Spanish Tragedy 'Language exerts hidden power, like a moon on the tides' (Brown 1989:56). Rita Mae Brown's sentiment may be more visibly apparent in Marlowe's Tamburlaine than Kyd's The Spanish Tragedy; however both Elizabethan dramas use language to convey power and authority in different ways. When considering the importance of speech in a play, there are fundamental functions must not be forgotten; speech is not simply a method of conveying a story to an audience, but also a manner of setting a scene when few props or stage materials are available. Speech must also be used to develop characters on stage, often achieved through the use of asides, in which a character speaks a line heard only by the audience, or by soliloquies, whereby a character delivers a dramatic speech whilst alone on stage, expressing their intimate thoughts and feelings. Lastly, as the only communication medium, a playwright must make their attempt at innovation and originality through character's speech. Whilst combining all these elements, the play must flow naturally through continued speech and tell the story in an unforced manner, so as not to seem constructed or disjointed for the audience; all this without even considering the actual words themselves! In many ways it can be argued that The Spanish Tragedy is a play of silences, or repressed language. In contrast, Tamburlaine is defined by its powerful dialogues, use of rhetoric and persuasive language throughout. Within the first act of the play, Marlowe constructs Tamburlaine as a powerful character through his own speech and through the speech of others. In the first scene of the play an image of Tamburlaine has been created for the audience by Mycetes, Meander, Cosroe and Theridamas. Tamburlaine's interaction with Zenocrate in Act One Scene Two is the first and most prominent example of the powerful effect that his words can have on other characters. ...read more.

Birringer notes that 'success often depended on the playwright's skill in imagining his language invested with the few effects available on an open stage - costumes, props, the use of space - and what the actors could contribute, their gestures, postures, movements' (1984:228) and therefore, speech was perhaps not always the most crucial element in creating a powerful presence on stage. Camden's short article suggests that Tamburlaine's physical appearance contributes a great deal to his persona and is the reason for many of his traits. Marlowe may well have had these Elizabethan beliefs of physiognomy in mind when writing Tamburlaine, but to what extent this can be applied to a performance of his play, where the actor may not be exactly what the playwright had in mind, is questionable. The symbolism and hidden meaning is more typical of Kyd's The Spanish Tragedy in which words are always more carefully chosen and very often hidden from the public sphere. As previously mentioned, The Spanish Tragedy can be viewed as a play of silences, plagued with lies, deception, misunderstandings and manipulation of language. Scott McMillin's article focuses on the figure of the Old Man or Senex in the play; 'The Old Man is virtually silent, unable to connect the past to the present through speech, and in a play rife with language this figure of silence holds a special position' (McMillin 1972:27). He works though symbolism and metaphor; silence perhaps more powerful in this instance to convey his circumstances. This figure is especially poignant as Hieronimo confuses him first for his son; 'Sweet boy, how art thou chang'd in death's black shade!' (3.13.146) and then sees himself; 'Thou art the lively image of my grief' (3.13.162). At the end of the play, Hieronimo actually becomes this figure of silence, unable to express himself as 'He bites out his tongue' (4.4.191.1). The General of the Spanish army is the opposite of this; he serves only to publicly communicate information to the audience about the battle between Spain and Portugal. ...read more.