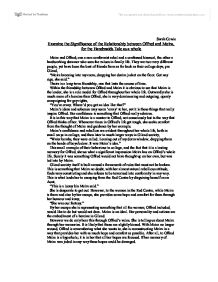 Examine the Significance of the Relationship between Offred and Moira, for the Handmaids Tale as a whole

Sarah Cowie Examine the Significance of the Relationship between Offred and Moira, for the Handmaids Tale as a whole Moira and Offred; one a non conformist rebel and a confessed bisexual, the other a hardworking dreamer who sees the values in family life. They are two very different people, yet have been the best of friends from as far back as their college days, pre Gilead, "Moira breezing into my room, dropping her denim jacket on the floor. Got any cigs, she said." Theirs is a long-term friendship, one that lasts the course of time. Within the friendship between Offred and Moira it is obvious to see that Moira is the leader, she is a role model for Offred throughout her whole life. Outwardly she is much more of a heroine than Offred, she is very domineering and outgoing, openly campaigning for gay rights, "You're crazy. Where'd you get an idea like that?" Moira's ideas and schemes may seem 'crazy' to her, yet it is these things that really inspire Offred. Her confidence is something that Offred really admires. It is in this way that Moira is a mentor to Offred, not consciously but in the way that Offred thinks of her. ...read more.

Moira obviously values Offred's friendship but it does not appear to be as vital to her. When they are together in the Red Centre Offred is strengthened by Moira's mere presence, whereas Moira is simply desperate to escape. She is an individual, who copes and acts alone, "Moira had power now, she'd been set loose, she'd set herself loose." Moira's feistiness is displayed in her actions, her sense if dress, her language, and her eventual escape. Offred also contains similar feistiness, yet hers is brought across in reflection. It is possible to see the seeds of Moira's strong individuality that leads to her escape, in her college days and her sense of dress, "In her purple overalls, one dangly earring, the gold fingernail she wore to be eccentric." This strength of character also means Moira has much more of a clarity of vision than Offred. She points out the truth of the colonies to Offred when they meet in the toilets in Jezebels, and seems to have quite a large understanding. Offred does not display similar understanding, but seems not to want to. If she fully grasps the horror of Gilead it would be much harder for her to continue with life every day, and not to think of her mother and Luke, who have most probably been caught up in the full horror of Gilead society. ...read more.

Here, in the toilets, they are offering equal emotional support to one another, it is not a case of one being more dependant than the other, but both being brought to the same level, with the same needs. Whilst Offred's dependence on Moira has faded, Moira's dependence of Offred has grown. Throughout the whole of the Handmaid's Tale, Moira is an ideal to Offred. She provides constant emotional support, both when together and after they have been separated. However these women who start off so different, end up more similar than they would have thought. Moira's rebellion has eventually cost her something; she will end up in the colonies, "I'd like her to end with something daring and spectacular...but as far as I know, that didn't happen." Offred still wants to hold on to this ideal of Moira, but it is now impossible, that Moira has gone. Whether or not Offred eventually escapes or ends up recaptured like Moira is unknown, however what does become evident at the end, is how many heroic qualities Offred herself embodies. She may not be outwardly daring, but is very resilient and manages to survive everything that is thrown at her throughout her life. Even without this image of Moira she still manages to pull through. Her fate to us is unknown, yet we would like to think that after everything, her outcome is more successful than Moira's. ...read more.