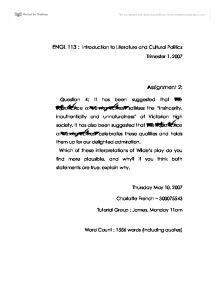 Examining the &quot;insincerity, inauthenticity and unnaturalness&quot; of Victorian high society in Oscar Wilde's 'The Importance of Being Earnest'.

ENGL 113 : Introduction to Literature and Cultural Politics Trimester 1, 2007 Assignment 2: Question 4: It has been suggested that The Importance of Being Earnest satirises the "insincerity, inauthenticity and unnaturalness" of Victorian high society. It has also been suggested that The Importance of Being Earnest celebrates these qualities and holds them up for our delighted admiration. Which of these interpretations of Wilde's play do you find more plausible, and why? If you think both statements are true, explain why. Thursday May 10, 2007 Charlotte French ~ 300075543 Tutorial Group : James, Monday 11am Word Count : 1556 words (including quotes) In the play The Importance of Being Earnest Oscar Wilde can be seen to both satirise elements of Victorian high society, and to celebrate them and hold them up for delighted admiration. Otto Rienert supports the argument of this play as a satire: "Wilde's basic formula for satire is [his characters'] assumption of a code of behaviour that represents the reality that Victorian convention pretends to ignore" (Rienert 15). But the assumption that The Importance of Being Earnest is trying to pass on a message to its audience about Wilde's opinions of Victorian society completely goes against Wilde's self-proclaimed commitment to aesthetic doctrines. As well as reading this play as a satire or celebration, it is possible to read it as a prime example of the aesthetic ideals Wilde and his contemporaries were trying to uphold. ...read more.

Serious and moralising Victorian audiences might have expected some sort of remonstrance, or at least Algy and Jack reforming their actions for the better. But they "steadfastly refuse to embrace the melodramatic practice of reconciling their behaviour to that of the middle class" (Gillespie 171). Instead, they embrace what it is to be a dandy. They are tamed from their renegade behaviours in some respects, but they continue to resist conforming to the conventions of Victorian life. The message that could be seen to lie behind the play is this: that anyone who did not recognise Jack and Algy as renegades, rather than dandies, does not understand the truth of dandyism. This can be seen as a criticism of Wilde's Victorian audience members and their stereotypes, for "only the uninitiated mistake the dandy for the renegade" (Gillespie 169). True dandies understand the difference between the sensational and the vulgar. At the beginning of the play, Jack and Algy are unaware of this distinction. But come the play's close, they have reformed to an appreciation of it. However, these assumptions about what Wilde might be trying to tell his audience do not align themselves with the doctrine of aestheticism. The discussion of moral messages and observations in The Importance of Being Earnest lean towards a more didactic approach to art. Addressing the play as either a satire or a celebration of Victorian society might also suggest that it is a mimetic approach. ...read more.