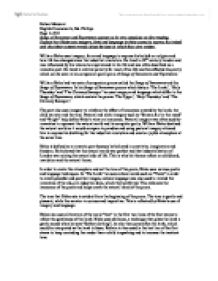 Explain how Blake uses imagery, form and language in these poems to express his beliefs and what their content reveals about the time in which they were written.

Songs of Innocence and Experience appears to be very simplistic on first reading. Explain how Blake uses imagery, form and language in these poems to express his beliefs and what their content reveals about the time in which they were written. William Blake uses imagery, form and language to express his beliefs on religion and how life has changed since the industrial revolution. He lived in 18th century London and was influenced by his visions he experienced in his life and was often described as a romantic poet. He lived in relative poverty for most of his life and this affected his poetry which can be seen in his companion poem pairs of Songs of Innocence and Experience. William Blake had two sets of companion poems called the Songs of Innocence and the Songs of Experience. In his Songs of Innocence poems which feature 'The Lamb', 'Holy Thursday' and 'The Chimney Sweeper' he uses imagery and language which differ to the Songs of Experience, which contain the poems 'The Tyger', 'Holy Thursday' and 'The Chimney Sweeper'. The poet also uses imagery to reinforce the effect of innocence created by the lamb, the child narrator and the tone. Pastoral and white imagery such as "Stream & o'er the mead" and "Bright" help define Blake's view on innocence. Pastoral imagery was often sued by romantics to represent the natural world and its complete purity. William Blake idealised the natural world so it would compare to paradise and using pastoral imagery allowed him to express his disliking for the industrial revolution and create a joyful atmosphere at the same time. Blake is defined as a romantic poet because he believed in creativity, imagination and freedom. He believed that the natural world was perfect and that industrialization of London was ruining the natural side of life. This is why his themes reflect on childhood, revolution and the natural theme. ...read more.

One aspect Blake was strongly against was religious hypocrisy, this was the idea that the Church was trying to tell people the right thing to do, but in fact were doing the exact opposite by neglecting the children and imposing fear into people using God. In the 'Tyger', Blake's companion poem to the 'Lamb', Blake explores the question of how God could create a "meek" and "mild" creature like the Lamb and yet still create the wild tiger. Blake uses industrial imagery to represent forces that can become destructive and negative; he uses "hammer", "chain", "anvil" and "furnace" to show the reference to the industrial revolution. The effect that industrial imagery gives is that it shows the tiger has been crafted in a furnace or factory, and Blake, being a romantic, dislikes the industrial revolution and therefore the tiger. Another interpretation of the industrial fire imagery is that it represents h**l on earth and Blake's view that with the coming of the industrial age, the earth is being destroyed. However, the fire could also represent cleansing and purification. One aspect of Blake's work we must consider is the fire associations, we must take into account that most people were Church of England followers and that time and would have made the associations much quicker than modern readers. The poet also uses dark imagery to represent the negative aspect of life and the industrial ages. One phrase that illustrates that is "forest of the night" which symbolises the wildness of the tiger and contrasting to the pastoral imagery in the lamb. He also uses words which symbolise darkness such as "fearful" and "dread" that creates a sense of doubt in the benevolence in God. The doubt is then reinforced by the rhetorical question of "What immortal hand or eye, / Could frame thy fearful symmetry" which is asking why God dared to create this beast and the symmetry is referring to the fact all humans have a duality, a good and bad side, yet the tiger does not. ...read more.

Blake's 'Holy Thursday' companion poems explore two different views of how the Church and state, together, are trying to help the children. In the Songs of Innocence poem, Blake is trying to portray a sense of cleanliness, purity and happiness in the children, which is expressed when he describes the children flowing through the "Thames waters" which is the river that runs through the centre of London, trying to imply the children are at the heart of the city. Blake's message is that the "Grey headed beadles" are performing good deeds and are helping the children and that society is working together to help the future of the children. However, Blake subtly suggests that all is not as it seems when he says the children have "innocence faces clean" which could mean the children have been smartened up just for this occasion. In his Songs of Experience poem, Blake turns his subtle suggestion into a direct accusation that the Church and state are in fact the reason why the children are in such a bad state. He conveys the message that the children are forced to pray to God, and that religion is used to cover up their bad deeds and that the church are hypocrites. He gives us the picture that the children have no future when he writes "their fields are bleak & bare" but seems to suggest that there is a future for these children somewhere when he illustrates that where "the sun does shine" and the "rain does fall" there is chance. This poem clearly shows Blakes' understanding of society, and this poem reveals Blake's opinion on society in general and through this, and it's companion poem we can suggest that in 18th century London, the rich got richer and the poor got poorer and that while it was society's duty to help the poor, they in fact accelerate the process of neglection and deprivation of a future for the children. However, while there are differences in the poem there are similarities which are clearly evident. ...read more.