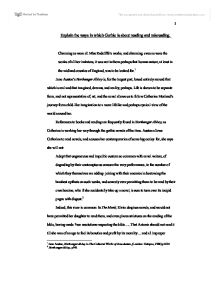 Explain the ways in which Gothic is about reading and misreading

Explain the ways in which Gothic is about reading and misreading. Charming as were all Miss Radcliffe's works, and charming, even as were the works of all her imitators, it was not in them perhaps that human nature, at least in the midland counties of England, was to be looked for.1 Jane Austen's Northanger Abbey is, for the largest part, based entirely around that which is real and that imagined, dreams, and reality, perhaps. Life is shown to be separate from, and not representative of, art, and the novel allows us to follow Catherine Morland's journey from child-like imagination to a more lifelike and perhaps cynical view of the world around her. References to books and reading are frequently found in Northanger Abbey, as Catherine is working her way through the gothic novels of the time. Austen allows Catherine to read novels, and accuses her contemporaries of some hypocrisy- for, she says she will not: Adopt that ungenerous and impolitic custom so common with novel writers, of degrading by their contemptuous censure the very performance, to the number of which they themselves are adding- joining with their enemies in bestowing the harshest epithets on such works, and scarcely ever permitting them ...read more.

It is easy to believe that the document found by Catherine in Northanger Abbey could be some secret letters, as Catherine does, and the disappointment when they transpire to be nothing more than laundry lists function as another surprise for the reader. These plot twists form another potential for misunderstanding in anticipation: the events which the reader expects are not those intended by the author. As such, the reader is forced to read, or be faced with the possibility of misreading and misinterpreting the events of the novel. The elopement of Alphonso and Agnes seems to have been laid perfectly, and the twist of the appearance of the true bleeding nun surprised the reader. The reappearance of Agnes, too, after her supposed death, comes as a surprise to the readership, after the vehement belief of the characters as to her death. The plot twists and complex storyline of Gothic writing can cause the reader to become disorientated within the text, and in search for firm grounding. As with many genres, the Gothic is interdependent on other pieces of literature, for no literary work can exist as a purely freestanding edifice. ...read more.

Frankenstein can be seen as abandoning his duty in leaving the Monster, and not fulfilling the duty of creator, or indeed, parent, in giving a proper upbringing and knowledge of morality to his creature. In Northanger, too, we have moments of seeing Catherine's untamed thoughts, particularly in her distress at being discovered in her foolish imaginings and suspicions by Henry. The reader witnesses her sudden transition from her childish imagination to a more sensible thought process. In The Monk, we see the evolution from the pious, perfect Ambrosio, to one willing to allow satanic worship to pass under his nose, to one who will actually turn to the devil in his desperation. This 'reading of the internal character as well as the external gives us greater insight into them. We are given a chance to not only view events through the eyes of someone else, but to gain access also to their thoughts, and to read their minds, as it were, like a book. Gothic fiction, perhaps, shows us the importance of reading, whether it is, in the most noticeable sense, as wider reading which will allow the reader to gain a better understanding and insight to the text, or the reading of the characters and their thoughts. ...read more.