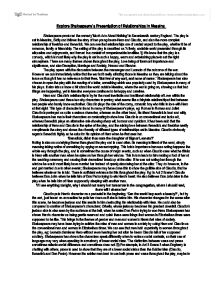 Explore Shakespeare's Presentation of Relationships in Messina Shakespeare produced the comedy 'Much Ado About Nothing' in Seventeenth century England. The play is set in Messina, Sicily and follows the story of two young lovers-Hero and Claudio, and also the more complex relationship of Beatrice and Benedick. We can see that relationships are of central aspect to the play, whether it be of romance, family or friendship. The setting of the play is described as 'A lively, sociable world presented through its etiquettes and enjoyments, and framed in a context of companionable localities.'(i) We know that the play is a comedy, which is most likely why the play is set in such a happy, warm and entertaining place-to set the right atmosphere. There are many themes shown throughout the play, Love being of foremost importance and significance, and also Deception, Marriage and Society, Honour and Slander. The play opens with the discussion between the messenger and Leonato of the outcome of the war. However we can immediately notice that the war isn't really affecting those in Messina as they are talking about the issue as though it has no relevance to their lives. 'But few of any sort, and none of name.' Shakespeare has also chosen to open the play with the reading of a letter, something which was popularly used by Shakespeare in many of his plays. It also lets us know a bit about the world outside Messina, where the war is going on, showing us that bad things are happening, yet in Messina everyone continues to be happy and carefree. ...read more.

We can see that men hold superiority to women throughout the play, eg; Leonato dismisses Hero without even hearing her out after he hears Claudio tell of her supposed adultery. Shakespeare has shown the characters speak differently when in various social contexts, so their use of language may vary when speaking to somebody of lower social class. 'The distinction between verse and prose sometimes reflects social difference and sometimes does not.'(ii) For example, in Act 3 Scene 3 when Dogberry is chatting with others, prose is used to show that they are of a lower social status than the Soldier Men (Claudio, Benedick and Don Pedro). However the soldier men tend to use both prose and verse throughout the play, maybe to show variation and to keep the audience attention from slipping away by repeating the same type of language. The language used between Hero and Claudio is quite aptly verse, again contrasting that of Benedick and Beatrice who seem to mainly use prose during their wars of wits. This also suggests the irony and artificiality of Hero and Claudio's relationship, for they are talking in verse romantically yet they break up, whereas Benedick and Beatrice's use of prose tells us of the realism of their relationship. The relationship between Benedick and Beatrice is shown to be far more complex than that of Hero and Claudio. Throughout the play they hide their real feelings for eachother behind humorous joking, poking fun at eachother with their wit. ...read more.

His scene, however, is in Prose, this may have been done just to show a change of scene, or it could have been done because women and seen as more poetic and passive which is why Beatrice's scene was written is prose. 'Here comes Beatrice: by this day, she's a fair lady, I do spy some marks of love in her.' It seems all they needed was for their friends to deceive them into thinking pone was in love with the other, when deep down they knew their feelings all along. Shakespeare's representation of their relationship shows complexity and how love can rise from friendship. Aside from romantic relationships there are various other types of relationship explored in Much Ado About Nothing. Shakespeare has shown contrasting sibling relationships between Hero and Beatrice and that of Don Pedro and Don John. Don John and Don Pedro are brothers who seem to hold strong hatred towards eachother; this is shown by them not talking to eachother, and Don John being shown as a villain, whereas Don Pedro is seen as an honorable soldier man. On the other hand we see Hero and Beatrice, who are cousins, and they hold a strong bond with eachother. They are shown to care for eachother very much; Elizabethan society would have thought this conventional, that the girls get along very well. There are various other family relationships shown throughout the play, an obvious one being that of Leonato and his daughter Hero. Gender and hierarchy between men and women would have been a big issue in Elizabethan times, as is shown in this father daughter relationship. ...read more.