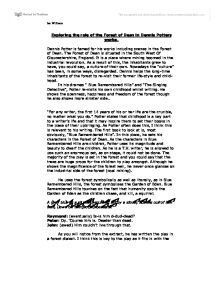 Exploring the role of the Forest of Dean in Dennis Potters works.

Exploring the role of the Forest of Dean in Dennis Potters works. Dennis Potter is famed for his works including scenes in the Forest of Dean. The Forest of Dean is situated in the South West Of Gloucestershire, England. It is a place where mining boomed in the industrial revolution. As a result of this, the inhabitants grew to have, you could say, a culture of their own. Nowadays the "culture" has been, in some ways, disregarded. Dennis helps the long-time inhabitants of the forest to re-visit their former life-style and child-hood. In his dramas " Blue Remembered Hills" and "The Singing Detective", Potter re-visits his own childhood whilst writing. He shows the openness, happiness and freedom of the forest though he also shows more sinister side.. "For any writer, the first 14 years of his or her life are the crucible, no matter what you do." Potter states that childhood is a key part to a writer's life and that it may inspire them to set their books in the place of their upbringing. ...read more.

Willie: Cooking Apple. And him yunt half sour. Honest. Peter: Bist thou going to give I a bit or not? Potter not only uses the forest and the forest dialect, but the domestic situations in the forest at the time of the setting of the play. As you can see from this extract, the father must have been an extremely distinguished person in the household. The Children are playing "House" in the old barn. Donald is playing Father and Angela is playing "Mum" Donald: Where's my b****y tea, Missis? Where's my tea, then? I want my cup of tea! (He is stamping up and down in angry imitation of "Authority") Angela: The kettle's just coming up to the boil, sweetie pie. Donald: (With enormous deliberation) I should b****y d**n and b****y blast and b****r and b****y flaming b****y flaming think so and all. Give us a kiss. (He hugs himself in glee, rocking slightly) Donald has just given us an insight into family life and to you and me, it doesn't sound very nice for the wife. ...read more.

In this story, a detective story, potter has to leave clues scattered around so that the mystery can finally be solved. The reader is made to think that the mystery is only in the first narrative but there are actually mysteries to be solved in both the first and second narratives. In the first, we need to find out who killed the girl, and in the second, we have to find out the reason for Marlow's illness getting so bad. By looking at his past we find clues to what makes Marlow what he is today. In the end, the forest turns out to be both the reason for his illness and the cure. Potter has had much success during his life and has had many of his works televised including Blue Remembered Hills and The Singing Detective. By writing for TV he has explored the boundaries of producing a script by setting the play in the Forest of Dean. By going back to his roots in many plays, Potter gives an interesting insight into youth in the beautiful, picturesque location that is The Forest Of Dean. Ian Williams ...read more.