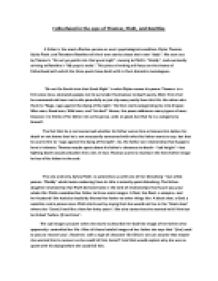 Fatherhood. We start out by Thomass Do not go gentle into that good night, moving to Plaths Daddy, and eventually arriving to Roethkes My papas waltz.

﻿Fatherhood in the eyes of Thomas, Plath, and Roethke A father is the most effective person on one?s psychological condition. Dylan Thomas, Sylvia Plath, and Theodore Roethke tell their own stories about their own ?dads?. We start out by Thomas?s ?Do not go gentle into that good night?, moving to Plath?s ?Daddy?, and eventually arriving to Roethke?s ?My papa?s waltz?. This piece of writing will focus on the theme of Fatherhood with which the three poets have dealt with in their dramatic monologues. ?Do not Go Gentle into that Good Night? is what Dylan names his poem. Thomas- in a firm voice tone- demands people not to surrender themselves to death easily. Well, first of all he commands old men not to die peacefully or just slip away easily from this life. He rather asks them to ?Rage, rage against the dying of the light.? He then starts categorizing me into 4 types: Wise men, Good men, Wild men, and ?his dad?! Hence, the poem addresses many types of men; however, he thinks of his father not as the grave, wild, or good, but that he is a category by himself. ...read more.

And that would explain why she was so upset with his dying before she could kill him. The images follow to unveil the feelings that Sylvia had for her father. She associated the fear and terror of her father with the struggle of Jewish people against the Germans- a vivid disturbing image that is. She also repeats the word ?black? which indicates the darkness of the father and his corrupted soul. However, when she is reminded of her natural love of her father, she justifies this ?black? love by saying that ?every woman adores a Fascist? and reminds herself of the ?brute brute heart of a brute like (him)?. Sylvia then ?daddies? him saying that the cleft in his chin rather than his foot ? the devil was described as having a huge cleft in his feet- does not make him any less devilish. Plath then relates to her father that she actually tried to get back to him by killing herself; however, when she couldn?t she made her life even worse by meeting a man like him, or as she puts it ?(she) ...read more.

Another connotation of violence is ?you beat time on my head?; the word ?beat? may indicate the father?s use of violence with his son. The word ?time? may refer to the inability of the child to forget the times in which his father used to beat him. However, as we carry on, we discover that despite the violence the poet?s old man used, the kid adored his father! He ?(hangs) on like death?, and he still ?(clings) to (his father?s) shirt?. The father, though violent, was actually loved by his son, and whenever he missed a ?step? in his son?s life the son was actually hurt. The dance thus serves as a metaphor for the overall relationship between father and son: intimate and vitally important, but also dizzying and anxiety provoking. The father-son relationship should?ve been smooth and easy but in reality it was awkward and stumbling. However, the son is plaintively ?still clinging? to his father as if he does not want the dance ?the relationship- to end. He simply found it difficult to let his father go. ...read more.