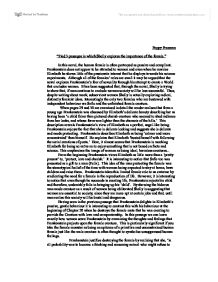 Find 3 passages in which Shelly explores the importance of the female.

Poppy Freeman "Find 3 passages in which Shelly explores the importance of the female." In this novel, the human female is often portrayed as passive and compliant. Frankenstein does not appear to be attracted to women and even when he marries Elizabeth he shows little of the passionate interest that he displays towards his science experiments. Although all of the females' roles are small it may be argued that the novel explores Frankenstein's fear of sexuality through his attempt to create a World that excludes women. It has been suggested that, through the novel, Shelly is trying to show that, if men continue to exclude women society will be less successful. Thus, despite writing about meek, subservient women Shelly is actually exploring radical, distinctly feminist ideas. Interestingly the only two females who are bestowed with independent behaviour are Safie and the unfinished female creature. When pages 29 and 30 are examined in detail the reader realises that from a young age Frankenstein was obsessed by Elizabeth's delicate beauty describing her as having been 'a child fairer than pictured cherub-creature who seemed to shed radiance from her looks, and whose form was lighter than the chamois of the hills.' This description reveals Frankenstein's view of Elizabeth as a perfect, angel-like being. ...read more.

It is interesting to notice that Frankenstein attributes freewill to this female Creature yet not to Elizabeth. This could explain the contrast in his reactions and suggests that he is afraid of independent, freethinking women and hence he destroys them. Here Shelly is investigating fundamental feminist ideas. Shelly recognises that men are fearful of women with free will and will try to suppress them. Frankenstein attributes cruel, evil, in-humane characteristics to the beast when he worries that 'she might become ten thousand times more malignant than her mate, and delight, for its own sake, in murder and wretchedness.' This suggests that he views the creature as wicked and has failed to realise, despite the creature's explanation that he is only driven to such grotesque behaviour due to his unhappiness. Frankenstein attributes similar characteristics to the male creature as to the female. Thus Shelly implies that females are not all that different from men and that the helpless compliance that Elizabeth shows is not an inevitable female trait but rather she is like this because, unlike the creature she suppresses her passionate feelings. However, more importantly, Frankenstein denounces the male by suggesting that the female could become more mighty and powerful than men. Throughout the novel there are suggestions that Frankenstein is fearful of his own sexuality. ...read more.

Here Shelly suggests that one importance of females is to provide comfort and companionship and that without females, society would be unhappy and so people would become cruel and monstrous like the Creature. Similarly, later Frankenstein elucidates the Godwinian theory when he clearly describes his desire to, 'feel the affections of a sensitive being, and become linked to the chain of existence and events for which I am now excluded.' It has been suggested that, by Frankenstein producing life without the help of a female he is effectively attempting to obliterate the need for a female in Society. However, It could be argued that through Shelly making the Creature violent and destructive she is trying to show that, without females humanity will suffer and dangerous. Later, Shelly again suggests a similar idea when she puts the Creature's harmful behaviour down to his unhappiness that she, in turn connects to the loneliness that he experiences without a partner to love. In the novel there appear to be two different types of female; the majority are those who Frankenstein describes as being meek and na�ve beings such as Elizabeth but there are also the independent ones. Both Safie and the unfinished female creature are described as being self-determining and possessing free will, thus Shelly explores revolutionary feminist ideas by showing that females do not have to be subservient. ...read more.