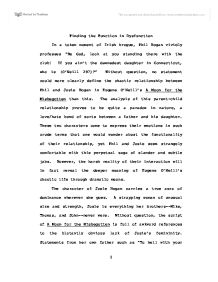 Finding the Function in Dysfunction.

Finding the Function in Dysfunction In a token moment of Irish brogue, Phil Hogan vividly professes "Be God, look at you standing there with the club! If you ain't the damnedest daughter in Connecticut, who is (O'Neill 297)?" Without question, no statement could more clearly define the chaotic relationship between Phil and Josie Hogan in Eugene O'Neill's A Moon for the Misbegotten than this. The analysis of this parent-child relationship proves to be quite a paradox in nature, a love/hate bond of sorts between a father and his daughter. These two characters come to express their emotions in such crude terms that one would wonder about the functionality of their relationship, yet Phil and Josie seem strangely comfortable with this perpetual saga of slander and subtle jabs. However, the harsh reality of their interaction will in fact reveal the deeper meaning of Eugene O'Neill's chaotic life through dramatic means. The character of Josie Hogan carries a true aura of dominance wherever she goes. A strapping woman of unusual size and strength, Josie is everything her brothers--Mike, Thomas, and John--never were. Without question, the script of A Moon for the Misbegotten is full of awkward references to the blatantly obvious lack of Josie's femininity. Statements from her own father such as "To h**l with your temper, you overgrown cow!" ...read more.

Mike (out of reach-sullenly): You're two of a kind, and a bad kind. Josie (good naturedly): I'm proud of it. Without question the remark by Mike Hogan is blunt and quite rude, and Josie still defends her father despite the continual arguments and conflicts between them. She even goes so far as to say she is proud of their similarities, though all they can see is their differences when face to face. Conflicts stir the heart, and it is this aspect of the play that powers the desires of both Josie and Phil. There is certainly more than meets the eye to this trouble plagued relationship between father and daughter. A drunken, unrefined, lonely Irishman, Phil wishes nothing more than for his daughter to find happiness in marriage, although it would pain him to see her go. A rare glimpse of this loving sensitivity is seen when Phil says "Maybe he'd like a fine strong handsome figure of a woman for a change, with beautiful eyes and hair and teeth and a smile (O'Neill 300)." Though appreciative of her father's unusually gracious compliments, Josie can't stand to succumb to manners and return the polite gesture. Instead, Josie replies in a jeering manner "Thank you kindly for the compliments. Now I know a cow kicked you in the head (300)." ...read more.

The manner in which O'Neill bonds these two main characters together through a deceptive charade of degrading and disrespectful speech is a very unique approach to showing the love between them. That is exactly what the reader must not falsely identify in A Moon for the Misbegotten, because in fact their relationship is one of sincere care and compassion, although on the outside it is hard to see. While the mantra of yelling and griping holds true for much of the play, the dynamic aspect of the occasional sincere conversation makes the reader stop and realize that there is more to Phil and Josie Hogan than just being a pair of intolerable and unforgiving characters. Though the question of effectiveness may come into play about this creation of conflict in O'Neill's A Moon for the Misbegotten, you must also question the affect on the play without this aspect of the perfectly believable father/daughter relationship. In O'Neill's world, there is no room for courteous peddling when the subjects of family relationships arise, just as there was none for O'Neill himself. A Moon for the Misbegotten is a play expressing the hardships and losses of O'Neill's life, from the loss of his mother to the traumatic experience of losing his brother, Jamie. It is through Phil and Josie Hogan that we come to understand a look into Eugene O'Neill's mind's eye, and the play could surely not survive the test of time without their wonderfully crafted dysfunctional relationship. ...read more.