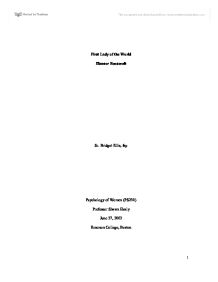 First Lady of the World Eleanor Roosevelt Sr. Bridget Ellis, fsp Psychology of Women (PS230) Professor Shawn Healy June 27, 2002 Emerson College, Boston Introduction Anna Eleanor Roosevelt, the first child of Elliot Roosevelt and Anna (Hall) Roosevelt, was born in New York City on October 11, 1884. Having been born to parents who were from prestigious, wealthy and distinguished families, faithful to the standards of Victorian virtue and social class, and successful in commerce and politics, she seemed destined to enjoy a very privileged lifestyle. Home was in the beautiful and elite Hudson Valley (Dietz & Williams, Producers, and Williams, Writer/Director, 2000; Hoff-Wilson, & Lightman, 1984). Eleanor, who regarded her own mother as the most beautiful woman in the world, knew as a very young child that she was a great disappointment to her mother who thought she was very plain and dull. Girls who were beautiful had their lives made for them. Their beauty and charm, considered essential in those days, were almost a guarantee that they would make a splendid debut into society, find a suitable husband, have children and preside over a large household. Eleanor's mother disdainfully called her "Granny," even in front of guests, because she thought the child was too somber, lacking all spontaneity and joy. Eleanor, described as homely by her mother, suffered emotional abuse and distancing from her. Unfortunately, the image created by the nickname "Granny" stayed with Eleanor and caused her to feel awkward, inferior and ugly throughout her life (Dietz & Williams, Producers, and Williams, Writer/Director, 2000; Hoff-Wilson, & Lightman, 1984). Of her father Eleanor wrote, "He was the one great love of my life as a child, and like many children, I have lived a dream life with him" (Hoff-Wilson & Lightman, 1984, pg. 4). Her father made her feel she was loved, and she enjoyed total security with him. He meant the world to her, and she cherished the little time spent with him. ...read more.

For Eleanor, it was a creative way of getting women into the media (Flemion, & O'Connor, 1987). She devoted substantial time during the Depression years to improving the condition of impoverished women. She worked to ensure that women were given jobs whether they were single or married. She also worked vigorously to guarantee that women receive fair wages, equal benefits, and support for childcare. She encouraged owners to keep their shops open in the evening so that the working women could still do the necessary shopping after work. Another achievement of Eleanor Roosevelt was to get women into positions of political power. Eleanor believed that it was important for women to get involved in politics, starting from the ground up, learning the ropes as they went while continually encouraging other women to get involved. Two years into Franklin's first term, fifty women were in prominent government positions through Eleanor's influence and contacts. She worked tirelessly for the protection of women against r****m and sexism. She was instrumental in getting black women into government positions. She encouraged white women to fight r****m against black women, and she brought black and white women's groups together. In 1940 Eleanor described herself as "an old woman who has worked on one front or another for almost forty-odd years for women's rights" (Flemion, & O'Connor, 1987, pg. 87). As well as working for the advancement of women in society, Eleanor was also very active in working for equal rights and opportunities for blacks. She opposed the n**i propaganda and the r****m directed against the Jewish people by Hitler. She reasoned with Franklin that the r****m being fought against Hitler and his forces in Europe was no different than the r****m being inflicted upon the black people in America (Grubin, 1994). The culmination of Eleanor's career was her work with the United Nations, which began in 1945 and continued for seven years. ...read more.

She had plenty of heartache and suffering in her life and own family, and at times she would sink into a dark depression, but she never wallowed in her depression or personal sorrows. She turned that outwards and mobilized all her emotional and physical energy for the benefit of others. She lived through two World Wars, the Great Depression, the foundation of the United Nations to promote equality internationally. She possessed courage and conviction in everything that she set out to do. She strongly believed that you gain strength, courage and confidence by every experience in which you really stop to look fear in the face. Her philosophy was that you must do the very thing you think you cannot do (Beasley, Schulman, & Beasley, 2001). "Her journey to greatness, her voyage out beyond the confines of good wife and devoted mother involved determination and amazing courage" (Cook, 1999, pg. 1). Summary In summary, I would say that I have encountered a remarkable woman from the 20th century, who overcame great obstacles and tragedies in both her personal life as well as her family life. It is amazing to me just how much she accomplished in her lifetime She devoted almost her entire life to doing good to others, fighting for what she believed in. She always put others first, never herself. She transcended her past to become one of the greatest champions of minority rights, basic human rights, women's rights to act as equals with men in the world of politics. She followed her own philosophy that individuals must discover for themselves who they are, what they want out of life, and what they want to contribute to life. Flemion, & O'Connor, 1987, said: "She left a short legacy about living for all humanity to ponder: 'We all create the person we become by our choices as we go through life. I a very real sense...we are the sum total of the choices we have made'" (pg. xv). ...read more.