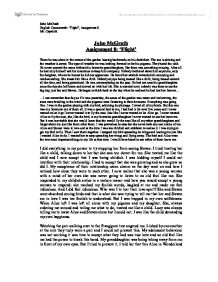 John McGrath Assignment 8: 'Flight' There he was alone in the corner of the garden leaning backwards on his deckchair. The sun is shining and the weather is sweet. The type of weather he was looking forward to for his pigeons. They hated the cold. He never seemed the same without his favourite granddaughter, like there was something missing. After all he had only himself and his memories to keep him company. Nobody bothered about him anymore, only his daughter, who to be honest he did not appreciate. He found her attitude towards him annoying and condescending. She treats him like a child. Nobody enjoys being treated like a child, being bossed around all the time, and being patronised. He was contemplating on the past. He had not seen his granddaughter since the day she left home and moved on with her life. She is married now, nobody was there to see the big day, just her and Steven. He began to think back to the day when he realised he had lost her forever... ...I can remember that day as if it was yesterday, the sense of the garden was warm and welcoming, the trees were bristling in the wind and the pigeons were fluttering in their dovecote. Everything was going fine. I was in the garden playing with my bird, admiring its plumage. ...read more.

My eyes were red with anger and the truth. The truth that I was to become a lonely old man. I stepped out onto the veranda and found that the garden was empty just as my life would be when Alice leaves. When Alice left my life was empty just like the garden on that afternoon. I had nobody to take any real notice in me everything was blank. I wanted my granddaughter to be happy but more than that I wanted to be happy and that meant not sharing. I was full of selfishness and greed; I wanted Alice all to myself. Out on the veranda I spotted Alice and Steven walking towards me. I realised that my life was ending and hers was just beginning. Her life had just begun. She was getting married, her new life with Steven had begun she was now free, free from me. As they returned and approached me I remember them fussing over me. They seemed to be appreciating me acknowledging me. They probably knew what was on my mind, what was really bothering me. They had a new bird for me. The bird made me feel warm inside it made feel wanted. My heart was opened up by a small gift. But I was kidding myself, they gave me the bird as a sop; they gave it to me to shut me up. ...read more.

Maybe she was feeling pity on me. Feeling pity because I have never been free in my life. Those tears will always remain a mystery to me. She may be crying for a whole number of reasons, of mixed emotions. I learnt from that day that I was the childish one, I was the one that had to mature. She had a mature relationship but I couldn't see that behind my selfishness. The clouds moved across the sun and erased the sunlight from his garden. He picked himself up and moved in the veranda. His mind was now clearer about the events of that day. As he knelt down onto the seat, the phone rang; he had to answer it. But he was scared. It was fate that it would be Alice but she would not want to speak to him. She always called to speak to her mother. He wanted to speak to her. His legs became e***t and without hesitation he dashed towards the phone, "Hello" he answered in a welcoming voice "Hello granddad is mum there please". It was Alice she never wanted him as usual "No she is out, but will I do? Funny enough I've just been thinking about you". The pair had not spoke to each other for a few months, he wanted all that to change. ?? ?? ?? ?? John McGrath English Coursework: 'Flight", Assignment 8 Mr. Capstick. ...read more.