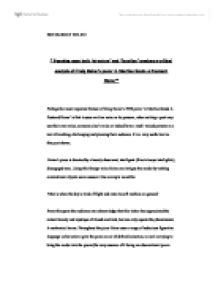 BEN MURRAY ENL 061 " Focusing upon both 'structure' and 'function' produce a critical analysis of Craig Raine's poem 'A Martian Sends A Postcard Home'" Perhaps the most important feature of Craig Raine's 1979 poem 'A Martian Sends A Postcard Home' is that is uses an alien voice as its persona, when writing a poet may use their own voice, someone else's voice or indeed have a multi-voiced persona as a tool of reaching, challenging and pleasing their audience. It is a very useful tool as this poet shows. Raine's piece is directed by a keenly observant, intelligent (if not always intelligible), disengaged tone. Using this foreign voice Raine can intrigue the reader by making conventional objects seem unusual. One example would be: 'Mist is when the sky is tired of flight and rests its soft machine on ground' From ...read more.

Raine alienates his audience by confusing them. The issue of defamiliarisation was a keystone in Russian formalist thinking. Due to our own lives being made up of repetition and countless encounters with the world, the way that we view things become automated into a single diatribe of less than conscious stumblings. If you like, we become over familiar with the world and our own existence that we do not appreciate individual experiences any more, we mould everything into a continuous blur of shapes and shades and limit our own understanding of events and repercussions. The function that Raine's audience defamiliarisation provides is that instead of the habitual way of viewing the world that normally happens the reader has to realise that the things they have taken for face value are no longer normal and thus have become abnormal, creating the platform for alienation. ...read more.

We take Raine/the Martian's figurative speech and begin to create word puzzles and pictures to develop a level of understanding that enables us to continue reading. The unnerving quality of the language therefore becomes the poems and success by encouraging the audience to appreciate what they are reading/developing. As 'A Martian...' is an observational poem you can see the poet at work, even though Raine is using an alien voice we are still reading thoughts and reflections that he has seen worthy to document, so we must take into consideration that although some of the meaning isn't directly clear we are reading work that is created by a very human inner source. It's this that can lead us to argue the origins of the voice that is 'narrating' it is feasible Raine put Martian in the title just to refer to the alienating content of the work and its actually a human voice referring to objects in his life. ...read more.