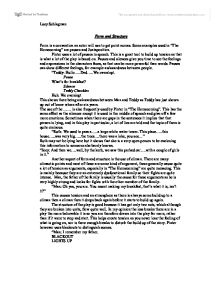 Form and Structure in &quot;The Homecoming&quot;

Form and Structure Form is a convention an actor will use to get point across. Some examples used in "The Homecoming" are pauses and Juxtaposition. Pinter uses a lot of pauses in speech. This is a great tool to build up tension as that is what a lot of the play is based on. Pauses and silences give you time to see the feelings and expressions in the characters faces, as that can be more powerful than words. Pauses can show different feelings, for example awkwardness between people. "Teddy: Hullo.....Dad.....We overslept. Pause What's for breakfast? Silence Teddy Chuckles Huh. We overslept This shows there being awkwardness between Max and Teddy as Teddy has just shown up out of know where after six years. The use of the ...... is also frequently used by Pinter in "The Homecoming". This has the same effect as the silences except it is used in the middle of speech and give off a few more emotions. ...read more.

Max, the father of the family is usually the cause for these arguments as he is very highly strung and looks for fights with the other member of the family- "Max: Oh yes, you are. You resent making my breakfast, that's what it is, isn't it?" This causes tension and an atmosphere as there is always some build up to a climax then a climax then it drops back again before it starts to build up again. The structure of the play is good because it has got only two acts, which although they are broken into units, flow quite well. In my opinion the less breaks there are in a play the more believable it is so you are therefore drawn into the play far more, rather than if it were to stop and start. This helps create tension as you never lose the feeling of what is going on, nor is there enough breaks to disturb the build up of the story. ...read more.

Juxtaposition is the transition between the first section when the family are in the room to when Teddy and Ruth arrive. This is because in the first section there are people occupying the space and then after a blackout Teddy and Ruth appear standing on the threshold of the room but not quite inside it. "BLACKOUT LIGHTS OUT Night TEDDY and RUTH stand at the threshold of the room." There are lots of different rhythms throughout the play. One is the use of repetition. "Lenny: You used to tuck me up in bed every night. He tucked you up, too, didn't he, Joey? Pause He used to like tucking up his sons. Max: Lenny. Lenny: What? Max: I'll give you a proper tuck up one of these night, son." The repetition of the phrase "tuck up" gives weight gravitas to what is being said. There are quite a few themes throughout the play. One of the most obvious ones is s*x. Others include impotence, animal imagery, mother figures, power and ownership and brain and emotion. Lucy Schlagman ...read more.