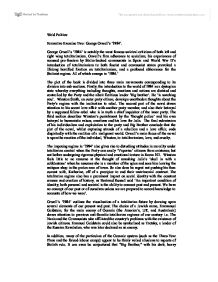 Wold Politics: Formative Exercise Two: George Orwell's '1984'. George Orwell's '1984' is notably the most famous satirical criticism of both left and right wing totalitarianism. Orwell's firm adherence to socialism, his experiences of accused pro-fascism by Stalin-backed communists in Spain and World War II's introduction of totalitarianism to both fascist and communist states provoked a lifelong horrified fixation on totalitarianism, and a profound abhorrence for the Stalinist regime. All of which emerge in '1984.' The plot of the book is divided into three main movements corresponding to its division into sub-sections. Firstly, the introduction to the world of 1984 as a dystopian state whereby everything including thoughts, emotions and actions are dictated and controlled by the Party and the albeit fictitious leader 'Big brother'. He 'is watching you'. Winston Smith, an outer party citizen, develops unorthodox thoughts about the Party's regime with the inclination to rebel. The second part of the novel draws attention to his secret love affair with another party member, and also their betrayal by a supposed fellow-rebel who is in truth a chief inquisitor of the inner party. ...read more.

We have no concept of our past or of ourselves unless we are prepared to accord knowledge to accounts of how we were'. Orwell's '1984' outlines the visualisation of a totalitarian future by drawing upon several elements of our present and past. The choice of a Jewish name, Emmanuel Goldstein, for the main enemy of Oceania (the America's, UK, and Australasia) draws attention to previous anti-Semitic totalitarian regimes of our century i.e. The Nazis and the Communists who affiliated the country's problems with the existence of Jewish citizens. Emanuel Goldstein could also be symbolised as Trotsky, a leader of the Russian Revolution, who was later declared as an enemy. In addition, many of the particulars of the Oceanic system (such as the Three-Year Plans and the forced-labour camps) appear to be thinly veiled allusions to aspects of Stalin's rule. It can even be conjectured that "Big Brother," with his dark, heavy moustache, is actually Stalin. ...read more.

In western societies 'Big Brother' doesn't make himself so obvious; we are not told today where we are watched, yet still we can be watched in 3D with cameras smaller than the head of a pin. And we can be heard by invisible lasers pointed at a solid from a mile or more away. We can be tracked from space with satellites with a reported resolution of less than one foot and telecommunication companies can detect our whereabouts from mobile phones. Who can verify what our 'free press' reports? Who checks and rechecks the information the media reports to us? What plausible lies are we constantly fed until they become fact, and get changed slowly a bit more? Supposedly there is a law that states subliminal advertising may not be used, but how is this checked, and to whom does it apply? From reading George Orwell's '1984' one can become quite dubious and fearful of the technological age and the possibility of totalitarian control even with the presence of Human Rights Committees and the like. Is 'Big Brother watching you' now? ...read more.