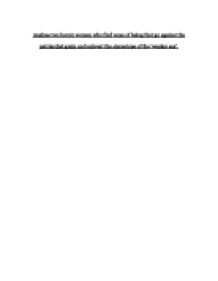 Fun Home by Alison Bechdel and The Scarlet Letter by Nathaniel Hawthorne. Analyse two heroic women who find ways of being that go against the patriarchal grain and subvert the stereotype of the 'weaker s*x'.

Analyse two heroic women who find ways of being that go against the patriarchal grain and subvert the stereotype of the 'weaker s*x'. Fun Home by Alison Bechdel and The Scarlet Letter by Nathaniel Hawthorne are two pieces of work in which a heroic woman is depicted. Both the memoir and the novella portray their female protagonists as going against the patriarchal grain - within a familial home and a Puritan society respectively - and subverting the stereotype of the 'weaker s*x' through displays of great emotional strength. As a result the protagonists of both works could be considered as female literary heroes. The Scarlet Letter is set in Puritan New England, and the first chapter of the novella immediately depicts a strict, grey society: "sad-coloured garments and grey steeple-crowned hats ... beetle-browed and gloomy" (Hawthorne, 1992, ch.1). This setting is furthered with descriptions of a heavy, spiked door and general use of pathetic fallacy to convey a sense of severity (Chapman, n.d.). When Hawthorne contrasts this colourless society with the scarlet shade of the "ignominious" letter 'A', that is forcibly emblazoned upon Hester Prynne's chest due to her conviction as an 'adulteress', Hester is seen to instantly be placed against the grain of the patriarchal Puritan society (Hawthorne, 1992, ch.2). Hester furthers this rebellion by staying in the town which has condemned her - she could easily have fled the oppressive society in search of a new life elsewhere, but instead chooses to live out her public humiliation ...read more.

Conversely, Hester's femininity is suppressed by the society she lives in: Puritan women were to dress to reflect their station, and colours were universally dark and "drab" (Bremer, 1995, p.49). Hester conforms to this ideal and it is not until she meets Dimmesdale in the woods that she can literally let down her hair and free her femininity. The exception here, however, is of Hester's fantastically-embroidered letter 'A'. One of the female spectators in the market place remarks: 'She hath good skill at her needle ... but did ever a woman, before this brazen hussy, contrive such a way of showing it? ... what is it but to laugh in the faces of our godly magistrates, and make a pride out of what they, worth gentlemen, meant for punishment?' (Hawthorne, 1992, ch.2) It can here be seen that Hester beautifies the symbol of her sinfulness as a means of taking control over it, which directly undermines the intentions of the patriarchy. Both works feature a female character who expresses herself via a creative medium: Alison discovers illustration, and Hester uses her impressive embroidery skills. In Fun Home Bechdel describes her family unit as: "... like an artists' colony. We ate together, but otherwise were absorbed in our separate pursuits." This panel is illustrated with an image of her family home, where each individual is encircled and presented as a silhouette working on his or her own creative projects. ...read more.

Hester could be a considered a hero throughout the course of the novella due to the strength in her silence. As Simone de Beauvoir writes: "... no group ever sets itself up as the One without at once setting up the Other over against itself." (n.d.) In The Scarlet Letter, it is clear that the Puritans class Hester as this 'Other': a model to which they carry out their own lives in contrast. The spectating wives in the market place scorn Hester, and her daughter Pearl is similarly treated by the children of the town: '... the little Puritans, being of the most intolerant brood that ever lived, had got a vague idea of something outlandish, unearthly or at variance with ordinary fashions, in the mother and child, and therefore scorned them in their hearts, and not unfrequently reviled them with their tongues.' (Hawthorne, 1992, ch.6) Hester endures this judgement in silence - normally a sign of passivity, but here a signifier of emotional strength, which clearly calls the stereotype of the 'weaker s*x' into question. It can therefore be said that Fun Home and The Scarlet Letter both present heroic women who have displayed emotional strength during times of adversity. In both works the female protagonists go against the patriarchal grain. Alison does this through the acceptance of her homosexuality and her own self, and Hester through the strength in her silence and refusal to be driven from her home. Therefore, both Alison Bechdel and Hester Prynne become heroic women. ...read more.