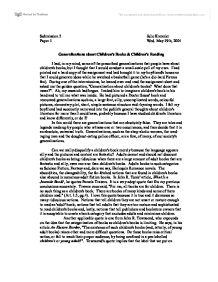 Submission 2 Julie Krenzler Paper 1 Wed. May 19th, 2004 Generalizations about Children's Books & Children's Reading I had, in my mind, some of the prescribed generalizations that people have about children's books, but I thought that I would conduct a small-scale poll of my own. I had printed out a hard copy of the assignment and had brought it to my boyfriend's house so that I could generate ideas while he watched a basketball game (he's a die-hard Pistons fan). During one of the intermissions, he leaned over and read the assignment sheet and asked me the golden question, "Generalization about children's books? What does that mean?". Ah, my research had begun. I asked him to imagine a children's book in his hand and to tell me what was inside. He had pictured a Doctor Seuss' book and recounted generalizations such as, a large font, silly, uncomplicated words, colourful pictures, elementary plot, short, simple sentence structure and rhyming words. I felt my boyfriend had succinctly narrowed into the public's general thoughts about children's literature far more than I could have, probably because I have studied children's literature and know differently, or do I? ...read more.

Although there are many generalizations about children's books, we cannot ignore the many ones placed upon children's reading and the patterns surrounding it, such as the momentous occasion when a child first begins to read. We, as a society, place great value, and therefore great pressure, on children being able to read at an early age. We want them to read as early as they can. One could even say that a measuring stick for success in a child's development is often how early they began to read. There are bragging rights for parents who have early readers, just the same way as when a child first learns to walk and talk. Yet as the child grows up there is less emphasis on reading and more on sports, extra-curricular and academic achievements in math and science. Somewhere along the line of a child's growth the meter stick of development shifts. And I began to wonder where the shift started and why it even started at all. It seems to me that the bragging rights that were once in place for reading, at six or seven, are not there anymore. ...read more.

This was a hard one for them to answer, but when I suggested that we might as well get rid of hard copies and revert to online copies, there was a resounding, "No!". There is something about the physical presence of a book that simply cannot be replaced by microchips and screen. My students argued that there was something magical about a holding a book, turning its pages and being swept into the story. A computer screen and keyboard cannot possibly mimic that supernatural feeling. I wish I could have, at that moment, played for them an old movie favourite of mine called The Neverending Story, which was made in the mid eighties. It is a story about a boy who finds a mysterious and magical book and when he opens the book and begins to read it, he is pulled into the storyline and lives out the events of the plot. That is what books do and I regret that a great many children and adults do not know it. As a final note I would like to come back to Travers' quote, which proves to me that books are simply books; books should not limit, books should not embarrass, books should not be the source of bragging rights, but books should be available and inclusive and they should be read. ...read more.