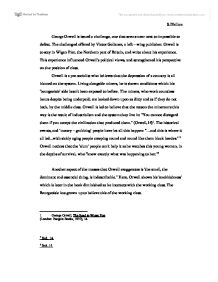 George Orwell is issued a challenge, one that seems near next to impossible to defeat.

George Orwell is issued a challenge, one that seems near next to impossible to defeat. The challenged offered by Victor Gollanez, a left - wing publisher. Orwell is to stay in Wigan Pier, the Northern part of Britain, and write about his experience. This experience influenced Orwell's political views, and strengthened his perspective on the position of class. Orwell is a pro socialist who believes that the depression of a country is all blamed on the system. Living alongside miners, he is shown conditions which his 'bourgeoisie' side hasn't been exposed to before. The miners, who work countless hours despite being underpaid, are looked down upon as dirty and as if they do not bath, by the middle class. Orwell is led to believe that the reason the miners are this way is the result of industrialism and the system they live in: "You cannot disregard them if you accept the civilization that produced them." (Orwell,14)1. The historical events, and 'money - grubbing' people have let all this happen: "...and this is where it all led...with sickly aging people creeping round and round like them black beetles." ...read more.

It's strictly not working; it's not helping anyone, just destroying. On to working in these times, the workers of the country pay more for their houses than the Corporate owners do. The Corporate owners get fancy houses, as the working class is still entitled to only the dirt of houses. Then to switch sides, there are Corporate houses, where the middle-class people have it ten times better off than the working class, but still think its not good enough for them. The poor aren't taking anything they have for granted, yet the 'upper' class still seem to complain. Unemployment is an issue that not even the unemployed can control. As Orwell believes, it is an issue which is managed by the system, and the people are just victims of it. The "fat-bellied' folks believe that the only reason a worker is unemployed is because he is lazy, which is wrong. When there is no work available or available with almost any benefits, anyone would rather sit on the 'dole'. The statistics of these unemployed are all under-estimated. Organizations under the government, such as the UAB (Unemployment Assistance Board), the PAC (Public Assistant Committee), and the Means Test, are there just for mere survival. ...read more.

8 Orwell gives his views which are purely subjective, and justifies it by what he observes. His political views are views with prejudice and he is fearless when mentioning the upper and middle classes. Orwell is basically alluding to the classes as being hypocrites. Theoretically, concluding that the Bourgeoisie is in control of the socialism movement, than the working class is. That the 'machine' development is more involved in the movement, then one would predict, and the 'progressives' wouldn't mind to "reduce the world to something resembling a chess-board."9 Orwell thinks that an effective Socialist party would be the only solution to the conditions hovering over the northern part of Britain. Yet, there is no such thing as an 'effective' Socialist party, which would only lead to Fascism. Orwell comes to the conclusion that no one really is interested in solving the problem, and "a man without a collar," will never be respected unless he falls to the 'suicide" of Fascism. Therefore, closing that Socialism is impossible. 1 George Orwell, The Road to Wigan Pier (London: Penguin Books, 1937), 14. 2 Ibid., 14. 3 Ibid.,15. 4 Ibid.,56. 5 Ibid 6 Ibid.,112. 7 Ibid.,134. 8 Ibid.,137. 9 Ibid.,166. S.Dhillon ...read more.