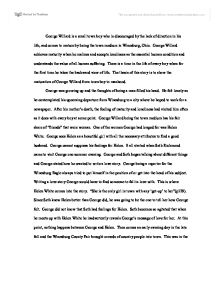 George Willard is a small town boy who is discouraged by the lack of direction in his life, and comes to mature by being the town medium in Winesburg, Ohio.

George Willard is a small town boy who is discouraged by the lack of direction in his life, and comes to mature by being the town medium in Winesburg, Ohio. George Willard achieves maturity when he realizes and accepts loneliness as the essential human condition and understands the value of all human suffering. There is a time in the life of every boy when for the first time he takes the backward view of life. The thesis of this story is to show the maturation of George Willard from town boy to manhood. George was growing up and the thoughts of being a man filled his head. He felt lonely as he contemplated his upcoming departure from Winesburg to a city where he hoped to work for a newspaper. After his mother's death, the feeling of maturity and loneliness had visited him often as it does with every boy at some point. George Willard being the town medium has his fair share of "friends" that were woman. One of the women George had longed for was Helen White. George sees Helen as a beautiful girl with all the necessary attributes to find a good husband. George cannot suppress his feelings for Helen. It all started when Seth Richmond came to visit George one summer evening. ...read more.

Kate Swift's profession is one, which requires that she relay information to people on a daily basis. She is responsible for their attaining knowledge. In this manner, she symbolizes a medium of communication in much the same way as George Willard does. Their parallel roles place George in a different light to Kate. She sees him as a genius. He seems like a genius to her is because of away in which he was able to use words. Words speak to her communicate to her through George Willard. The time the two are standing together as Kate tries to impress George with the difficulty of becoming a writer is described as lyrically, a passer-by might have thought them about to embrace. The scene becomes a love scene because of the influence of language and the artistry of words. Kate told George he must not become a mere peddler of words. The thing to learn is to know what people are thinking about, not what they say. She is voicing the problem, which had come about because of the isolation and disillusionment of modern man. Words are artifice unless they express the inner being of man. Kate is looking to George to share her hunger for life and language but she does not know how to tell him explicitly. ...read more.

Now it is time for him to move on and grow into the manhood he as always strived. Not only has George been an asset to the people of Winesburg but also he has learned a lot from his educators, the women of Winesburg and from the many townspeople. George has no regrets and will be an asset to the new town he moves. As this paper ends the development of George Willard has been expressed. George Willard has an intense craving to be different from other men. Willard realizes that unless he does something to change the course that his life is taking, he will never be a great man in anyone's eyes. He likens the transition into sophistication to a deep mood that takes over. It sweeps over his whole being and completely encompasses all of his thoughts and actions. George Willard realizes and aches over the time limitations placed on his ambition. He intends to journey to a major city and get a job at a newspaper. He hopes that his feelings of immaturity will be erased by his importance there. Although it is not much, it is vital to him that he finds something to be remembered and admired. As George Willard looks at his meaningless life and his bleak surroundings, fresh ideas, new ambitions, oppressing sorrows and lonely thought play with his mind, trying desperately to overcome him. ...read more.