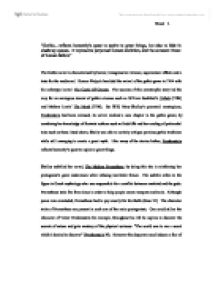 &quot;Gothic...reflects humanity's quest to aspire to great things, but also to hide in shadowy spaces. It represents perpetual human ambition, and the constant threat of human failure&quot;

"Gothic...reflects humanity's quest to aspire to great things, but also to hide in shadowy spaces. It represents perpetual human ambition, and the constant threat of human failure" The Gothic novel is characterised by horror, transgressive violence, supernatural effects and a taste for the mediaeval. Horace Walpole heralded the arrival of the gothic genre in 1764 with his archetypal novel: The Castle Of Otranto. The success of this catastrophic story led the way for an analogous torrent of gothic releases such as William Beckford's Vathek (1786) and Mathew Lewis' The Monk (1796). By 1818, Mary Shelley's perennial masterpiece; Frankenstein had been released, its arrival marked a new chapter in the gothic genre; by combining her knowledge of feminist authors such as Radcliffe and her reading of patriarchal tales such as those listed above, Shelly was able to actively critique previous gothic traditions while still managing to create a great myth. Like many of the stories before, Frankenstein reflects humanity's quest to aspire to great things. Shelley subtitled her novel; The Modern Prometheus, by doing this she is reinforcing her protagonist's great endeavours while infusing inevitable failure. The subtitle refers to the figure in Greek mythology who was responsible for a conflict between mankind and the gods. Prometheus stole fire from Zeus in order to help people create weapons and tools. Although peace was concluded, Prometheus had to pay cruelly for his thefts (Rose 52). The character traits of Prometheus are present in each one of the main protagonists. One could utilize the character of Victor Frankenstein for example, throughout his life he aspires to discover the secrets of nature and gain mastery of the physical universe: "The world was to me a secret which I desired to discover" (Frankenstein 30). ...read more.

Frankenstein succeeded in his original goal: he wished to create life, to master the physical world and to play in the female arena of child bearing. He did all these things, he understood nature, and he took what his university lecturers had taught him and advanced that to undermine the Gods, just as Prometheus did in the Greek myth. Similarly to Prometheus, Frankenstein was punished for his actions. He paid the price of having to be responsible for the monster he created for the rest of his life. By running fleeing this responsibility, he lost everybody that he cared for, becoming a recluse, caring about nothing but destroying his beloved creation, this is demonstrated by his suicidal chase through the North Pole. It is in the discretion of the reader as to whether Frankenstein failed or succeeded in his goal. However it is worth noting that he dies desperate, lonely and unhappy and in a way killed in an act closely related to patricide. It is also worth probing into whether the monster failed or succeeded in his born mission and indeed whether it is his doing or the responsibility of his master. The monster gained life and was not destroyed despite his physical appearance. He learned about and experienced nature, but he was never accepted into normal civilisation on any level. He reaped revenge upon Victor Frankenstein and eventually led him to death: "I have pursued him even to that irremediable ruin" (Frankenstein 214). However, the creature never achieved happiness or acceptance. Some critics have read the monster to be Frankenstein's double, a symbol of both the goodness inherent in man, and his fated fall from grace. ...read more.

In a similar way to Victor Frankenstein, Vathek shows a total disregard for the very people he should be protecting. Vathek is promised by 'the Indian' to be given the information he craves if he is willing to sacrifice fifty of his vizirs children. The Caliph does not hesitate to obey this command, he returns to Samarah and: "put[s] on the appearance of affability to every one... and direct[s] the conversation to the children of his guests" (Vathek 98). After convincing his vizirs he wishes to praise each of the handsomest children he takes them to the precipice of a "dreadful chasm" (Vathek 99) and one by one leads them to his death, while the unknowing proud parents celebrate out of sight. Each of the novels discussed embody the title quote in regards to the gothic genre completely. They epitomize the common denominator between all gothic novels; the desperation of the protagonists to obtain what they crave. This could be the affection of another character, as in many gothic novels such as The Monk with Ambrosio chasing Antonia as an example. The difference between gothic protagonists and those in other genres is that the craving seems to be irrational and is of course usually underlined by a supernatural sub-plot. The threat of failure drives the characters to take actions that, to normal people, seem horrific, foolish and often crazy. None of the protagonists leave Mary Shelley's classic novel having fulfilled successfully all of their ambitions, each one falls down at some point, similarly to Beckford's Vathek and Walpole's The Castle of Otranto. However at the beginning of each novel they are all striving to fulfil their aspirations to achieve 'great things'. The title quote for this essay successfully illustrates the desperate plights of many gothic characters. It defines the troubles of each central character flawlessly in both the physical sense and the metaphorical sense. ...read more.