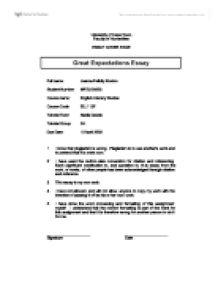 University of Cape Town Faculty of Humanities ESSAY COVER PAGE Full name: Joanna Felicity Morton Student Number: MRTJOA003 Course name: English Literary Studies Course Code: ELL113F Tutorial Tutor: Nadia Davids Tutorial Group: 24 Due Date: 12 April 2002 1. I know that plagiarism is wrong. Plagiarism is to use another's work and to pretend that it is one's own. 2. I have used the Author-date convention for citation and referencing. Each significant contribution to, and quotation in, this essay from the work, or works, of other people has been acknowledged through citation and reference. 3. This essay is my own work. 4. I have not allowed, and will not allow, anyone to copy my work with the intention of passing it off as his or her own work. 5. I have done the word processing and formatting of this assignment myself. I understand that the correct formatting is part of the mark for this assignment and that it is therefore wrong for another person to do it for me. _____________________ _____________________ Signature Date Great Expectations Essay We have reached the end of the second stage of Pip's Expectations, and he has recently learnt the true identity of his benefactor, namely, the convict who threatened him in the cemetery and on the marsh all those many years ago. The convict, Abel Magwitch, is moved by Pip's kind-heartedness and generosity, and decides to devote his life into transforming Pip from a blacksmith's apprentice into a wealthy gentleman. ...read more.

Magwitch soon opens up to Pip, telling him his story and how he too was an orphan and lived a life of crime out of necessity. He met Compeyson as a young man, and the two became partners - but when they were caught, Compeyson turned against him, forcing Magwitch to seek revenge. Earlier in the novel, it is him who Pip sees Magwitch struggling with in the marsh. Herbert, a friend who shares the apartment with Pip, later tells him that Compeyson was the man who stood Miss Havisham up on her wedding day. It is important to put Miss Havisham into context at this point. She is the wealthy, eccentric old woman who lives in a manor called Satis House near Pip's village. She constantly wears her faded, yellowed wedding dress, keeping her decaying, mouldy wedding cake on her table, with all the clocks in the house stopped at twenty minutes to nine. Because of Compeyson's failure to turn up at their wedding, Miss Havisham now has a grudge against all men, and intentionally raises Estella to be the instrument of her revenge, teaching her to break all men's hearts. Miss Havisham is a major character in the novel, as she affects the dynamism of the story. She unkindly keeps Pip in suspense, realising that he believes her to be his benefactor. This malicious behaviour is due to her negative mindset about men, and eventually her conscious comes into play. ...read more.

Returning many years later, he encounters Estella in the ruined garden at Satis House. Drummle (a man who attended tutoring sessions with Pip at the Pockets' house), her husband, treated her badly, but he is now dead. Pip finds that Estella's coldness and cruelty have been replaced by a sad kindness, and the two leave the garden hand in hand, Pip believing that they will never part again. Pip's character is passionate, romantic, and somewhat unrealistic at heart, and he tends to expect more for himself than is reasonable. He also has a powerful conscience, and he deeply wants to improve himself, both morally and socially. Referring back to pg 342-346, and to Magwitch's character, it is interesting to draw parallels between him and Miss Havisham. Both of them, I feel it is safe to say, wanted to improve Pip's character, although they both went about it in very different ways. Magwitch provided the finances, and Miss Havisham (through Estella) provided him with the inspiration. If it hadn't been for these two characters, Pip would have probably remained a country boy, working for Joe in the smithy. It is also interesting to note that Miss Havisham and Magwitch come from two completely different social classes. Miss Havisham was very wealthy, even though her family fortune had been misused by her unruly half brother, who had been convinced to sell half the share of the brewery to Compeyson, Miss Havisham's fianc�. Magwitch, on the other hand, was orphaned and poor, with an earliest memory of stealing turnips to feed himself. ...read more.