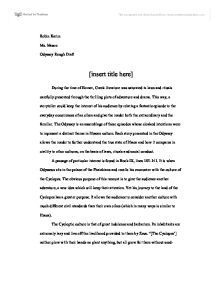 Robin Karim Ms. Mason Odyssey Rough Draft [insert title here] During the time of Homer, Greek literature was saturated in laws and rituals carefully presented through the thrilling plots of adventure and drama. This way, a storyteller could keep the interest of his audience by relating a fantastic episode to the everyday occurrences of an oikos and give the reader both the extraordinary and the familiar. The Odyssey is an assemblage of these episodes whose cloaked intentions were to represent a distinct theme in Ithacan culture. Each story presented in the Odyssey allows the reader to further understand the true state of Ithaca and how it compares in civility to other cultures, on the basis of laws, rituals and social conduct. A passage of particular interest is found in Book IX, lines 105-141. It is when Odysseus sits in the palace of the Phaiakians and recalls his encounter with the culture of the Cyclopes. The obvious purpose of this recount is to give the audience another adventure, a new idea which will keep their attention. ...read more.

While Odysseus is gone, the situation Telemachos must face reflects an environment with a similar social conduct. The suitors that have come to court Penelope have completely overtaken the oikos. All of Ithaca's goods and services are at their disposal, of which they did not work or pay for in any manner. "[The suitors'] heralds poured water over their hands for them to wash with, and the serving maids brought them bread heaped up in baskets, and the young men filled the mixing bowls with wine for their drinking" (Book I. ll. 44-149). Just as the Cyclopes relied on the gods, the suitors did not earn any of their food, but rather they relied on the (one-sided) hospitality of the Ithacans. The political order of the Cyclopes is a very sketchy, undefined one. There is no central government and it is as though they are in constant competition in order to maintain their survival. They do not necessarily look out for each other, but rather have their own personal goal to take care of themselves and their families by any means necessary. ...read more.

ll. 50-58). Telemachos tells of how the suitors have no respect for Penelope or the oikos and how they do not care about whether or not the food will run out. They are only out for themselves. In fact, they did not even go to Penelope's father's home to pay gift because they are too lazy and selfish. They is no order in the oikos, it just an unruly chaos in which every man is out to get the grand prize for the lowest price possible. Homer has a very ingenious style of story telling, in which he compares and contrasts Ithaca with the civilizations Odysseus encounters during his many years away. Each of these civilization is a reflection of what Ithaca is, was, or could be. In the case of the land of the Cyclopes, Odysseus has a glimpse of what is going back home without even being there. Because Odysseus goes through these journeys, he is able to better understand his own country, and gain a new appreciation for the social rituals which are common during his reign in Ithaca. ...read more.