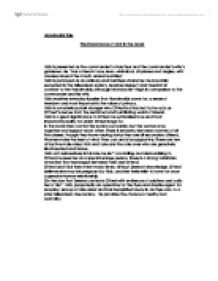 Handmaids Tale - The Importance of Nick in the novel

Handmaids Tale The Importance of Nick in the novel Nick is presented as the commander's chauffeur and the commander's wife's gardener. He ' has a French face, lean, whimsical, all planes and angles, with creases around the mouth where he smiles'. Nick is portrayed as an ordinary and harmless character, he is socially excepted in the Gileadean society, receives respect and freedom in contrast to the Handmaids, although his status isn't high in comparison to the commander and his wife. Nick receives everyday luxuries that Handmaids crave for, a sense of freedom and most importantly the value of privacy. Nick is a mysterious dark stranger who Offred is attracted to; he acts as Offtred's rescue from the restricted and humiliating world of Gilead. Nick is a great significance to Offred, he symbolises love and most importantly reality for which Offred longs for. In the novel men control the society outwardly, but the women stay together and support each other. There is empathy between women of all the classes, though they have varying status they are all secondary citizens. Women make the best of what they can and stay supportive. There are few attractive male roles; Nick and Luke are the only ones who are genuinely kind-hearted and brave. Nick acts subversively in his role, he isn't controlling and demoralising to Offred, he sees her as a special unique person. ...read more.

The ceremonies with the commander are useless, as Offred isn't conceiving, Serena Joy is desperate for Offred to conceive and will go to any lengths to ensure that Offred has the chance to be pregnant even if it means going against the strict Gileadean rules. As there is no other resort left for Serena Joy she asks for the forbidden, Serena Joy orders Offred to go to bed with Nick. Although Offred knows that she is being used, this time by the Commander's Wife, Offred's encounter with Nick is entirely different and her account of their first lovemaking is curiously quiet about what really happened. Offred tires to maintain her integrity in the face of uncertainty and desire. Offred describes Serena Joy escorting her out of the house to meet with Nick. 'She's here at midnight, as she said she'd be'. Serena Joy leads the way, Offred observes Serena Joy and her evident determination for the baby, her left hand clamps the banister, in pains maybe but holding on, steadying her. I think: she's biting her lip, she's suffering. She wants it all right, that baby'. When Offred is released to go and meet Nick she feels a huge sense of control and freedom, Nick is therefore associated with the importance of normality for Offred, 'I open the kitchen door, step out, wait a moment for vision. ...read more.

She needed these signs of reassurance to prevent her from going insane and hypnotised by the Gileadean regime. Offred wanted to be held and touched like Luke once did, so small but valuable for Offred as she was being held and touched for all the wrong reasons, but with Nick she feels special, exceptional, like a woman should feel, Nick gave her the gift of feeling as if she was needed for Nick, to love her. Nick listens to Offred's recital of the past history and her emotional outpourings. Nick is an extremely significant character as he acts as an escape out of the Gileadean world. He provides freedom for Offred, which is a rarity in Gilead it's a luxury that most Handmaids will never be able to experience. On the day of the escape he calls her by her real name reassuring and comforting her to ensure that she is in safe and trusting hands he repeats 'trust me', Nick saying these words gave a sense of comfort and relief. In this Novel Nick plays an important role for Offred, he leads her to freedom and prevents her from going insane in the world of Gilead. He leads her to a place where she cannot be humiliated and degraded. Nick became to understand her harsh position and realised what a strong, courageous and brave person she was. Nick gave her dignity back and made her a free woman. ...read more.