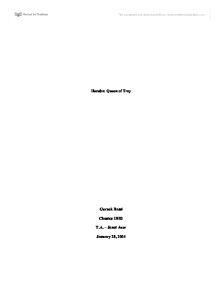 Hecuba: Queen of Troy Gurnek Bassi Classics 1BB3 T.A. - Janet Auer January 28, 2004 Homer's most famous works, the Iliad and the Odyssey, entwine many plot lines, with many characters, which induce many emotions. These stories involve such themes as love, deceit, war, mixed together with magic and the power of the mighty Greek gods to create not only some of the oldest, but some of the most well known epics ever written, or in Homer's case, recited. The Iliad faces many mighty warriors against each other, all at the whim of the gods, but Homer shows us these grand epics do not always have to revolve around mighty warriors, but in fact even minor characters play important roles in deciding the outcome of a story. These minor characters can also wield the power to show great emotion throughout the events of a story. One such character is Hecuba. She is the wife of Priam, King of Troy, and the mother of main characters such as Paris (the "abductor" of Helen) and most importantly of Hector, the bravest and mightiest warrior of the Trojans. Not much about Hecuba is said throughout the story of the Iliad, but we do see her in one of her more important roles, the role of a caring mother.1 This is the moment when Hector is waiting for Achilles outside the walls of Troy. ...read more.

overall, she loves Hector because he is her son, and just like any other mother, would not want harm to come to her son. In many ways, the women of Homer's epics can be compared to one another. This is because, although the women play on different sides of the struggle, some on the side of the Greeks, some on the side of the Trojans, and others on the side of both or none, all of the women are affected by the struggle in some way. Hecuba loses children and her city to the war, the beautiful Helen is the cause of the war, the goddesses watch the war from afar (yet still interfere), and women such as Calypso and Circe who also watch from afar, are still affected through the adventures of Odysseus. The main comparison is that between Hecuba and Helen. Both of these characters play a large role in the lives of the warriors, but have different effects on them. Hecuba plays a mothering character to warriors, such as her son, Hector.4 The warrior looks up to her for nurture, and a mothering type of love. On the other hand, warriors desire Helen, not for her nurturing, but for her sexuality. ...read more.