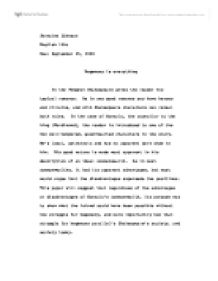 Hegemony is everything - The Tempest.

Jermaine Johnson English 155c Due: September 25, 2003 Hegemony is everything In the Tempest Shakespeare gives the reader his typical romance. As in any good romance you have heroes and villains, and with Shakespeare characters can reveal both roles. In the case of Gonzalo, the councilor to the king (Ferdinand), the reader is introduced to one of the few well-tempered, good-hearted characters in the story. He's loyal, optimistic and has no apparent dark side in him. His good nature is made most apparent in his description of an ideal commonwealth. As in most commonwealths, it had its apparent advantages, but most would argue that the disadvantages supersede the positives. This paper will suggest that regardless of the advantages or disadvantages of Gonzalo's commonwealth, its purpose was to show what the island could have been possible without the struggle for hegemony, and more importantly how that struggle for hegemony parallel's Shakespeare's society, and society today. ...read more.

As a result, Gonzalo comes up with a society that just focuses on living, with no basis on commerce or military conquest. He goes so far to even eliminate the need for literature, learning or even study, because they are not necessary in a society just focused on survival and not gain.? There are some minor disadvantages of Gonzalo's commonwealth, the first being the most obvious; that it is not realistic. Antonio describes it as, "The latter of his commonwealth forgets the beginning."? A commonwealth as Gonzalo describes it would be hard to implement because it would only be possible if society could rid itself of basic human nature. Civilized society is driven on the idea of discover and conquer, and it has not changed since the years of Shakespeare. This is made evident from the beginning of the play when the reader is made known that Prospero's kingdom and title were usurped by his own brother Antonio, and continued when Antonio begins to convince Sebastian to kill his brother (Alonso), by telling him that "My strong imagination see a crown/Dropping upon thy head."? ...read more.