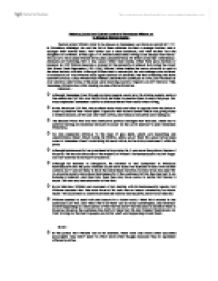 Historical, Social and Cultural context of Tennessee Williams on 'A Streetcar Named Desire'.

Historical, Social and Cultural context of Tennessee Williams on 'A Streetcar Named Desire'. Thomas Lanier Williams (later to be known as Tennessee) was born on March 26th 1911 in Columbus, Mississippi. He was the first of three children. He had a younger brother, and a younger sister named Rose. Their father was a shoe salesman, and their mother was the daughter of a minister. At the age of 14, Williams discovered writing as an escape from reality. This was at a time when Williams felt acutely uncomfortable. His father called him 'Miss Nancy', obviously not believing that a boy would rather read books, rather than play marbles or baseball. In 1929 Williams became a student at the University of Missouri. But during the Great Wall Street Crash Depression (1931-1934) Williams' father insisted he leave university to work in the shoe industry with him. Although Williams held a secure job, he was unhappy and suffered a breakdown. In 1936 Williams once again enrolled at university, this time attending the State University of Iowa. Once Williams had finished university he continued to write, and travelled all over America whilst many of his plays were receiving awards. Tragically on 24th February 1983, Tennessee Williams died, after choking on one of his barbiturates. ...read more.

This could show a conflict between his morality and sexuality, never to be resolved. ? Williams seemed to seek truth and beauty in a violent world. I think this is related to the American Civil War, and World War II as there was so many catastrophic, and historical events happening in a short period of time that he didn't feel the need to mention them in his plays, this gave the audience the ability to forget real life and transport themselves. He tried to bring out the best in people no matter what was happening around them. Social - ? In the period that Williams was in his element, there were also many other successful playwrights. They didn't seem to affect each other though, because they all expressed different qualities. ? Arthur Miller, writer of the Crucible and All My Sons was greatly affected by the events occurring, such as the American Civil War, and World War II, that he mentioned them frequently in his plays. ? Although the writers expressed themselves in what appeared to be completely different styles of writing, they had some similarities. Someone once said 'Miller and Williams' work was like a distant and passionate forest fire'. ...read more.

Cultural - ? A quality of many Southern writers is their vivid imagination. Some people may define this as 'bizarre and grotesque'. This may be because its roots lay in an awareness of being part of a dying culture. ? This cultural climate favoured the individualistic, the eccentric, and the outcast. ? This is the Southern culture that clearly appealed to Tennessee so much, and he mentioned frequently in his writing. ? His dislike for his mother had an adverse affect on his attitude of the romanticised south. But it was the south as 'a broken, damaged society with the ripe charms of decay' that fired his vivid imagination. ? The South seemed to him to stand for cultural values not based around the money-grabbing prosperous North. This can be demonstrated in A Streetcar Named Desire, where Blanche and Stanley represent the two opposing sides. ? His subjects for his plays was clearly influenced by his image of the South, but we can see, he was also heavily influenced by the 'happenings' in Europe at the time. ? It is possible to see a parallel between plays written in the same era, but over the Atlantic Ocean in Europe. A few European playwrights that influenced Williams are August Strindberg, Anton Chekhov, and Henrik Ibsen. ? In A Streetcar Named Desire you can clearly see the Southern and European cultures uniting. Emily Huntley ...read more.