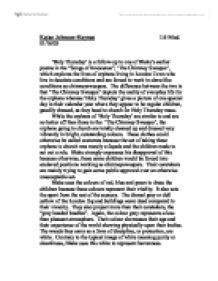 'Holy Thursday' is a follow-up to one of Blake's earlier poems in the &quot;Songs of Innocence&quot;, 'The Chimney Sweeper', which explores the lives of orphans living in London Town

Kejan Johnson-Haynes L6 Mod 01/16/03 'Holy Thursday' is a follow-up to one of Blake's earlier poems in the "Songs of Innocence", 'The Chimney Sweeper', which explores the lives of orphans living in London Town who live in desolate conditions and are forced to work in slave-like conditions as chimneysweepers. The difference between the two is that 'The Chimney Sweeper' depicts the reality of everyday life for the orphans whereas 'Holy Thursday' gives a picture of one special day in their calendar year where they appear to be regular children, gaudily dressed, as they head to church for Holy Thursday mass. While the orphans of 'Holy Thursday' are similar to and are no better off than those in the 'The Chimney Sweeper', the orphans going to church are totally cleaned up and dressed very vibrantly in bright, outstanding colours. ...read more.

The wands they carry as a form of discipline, or protection, are white. Contrary to the typical image of white meaning purity or cleanliness, Blake uses this white to represent barrenness. Therefore in its entirety, the picture painted by Blake is much like one of a flower growing in the middle of a desert. A second important description of the children is that of their mass abundance. Blake's iambic feet, gives a military feel to the whole poem and conjures up the image of soldiers walking "two and two" and they head into the church. Their great numbers makes them a mighty force to be reckoned with, thus they are compared to that of the Thames River. By comparing them to the power of the Thames, Blake makes the reader aware of how easy it would be for these children to simply overthrow their leaders, much in the same ...read more.

When Blake uses the word multitudes, it very literally refers to the large number of children, but in its Biblical comparison, 'multitudes' was the word used to describe the people who came to Jesus to be healed. Thirdly, the term 'mighty wind' used the children's voices as they sing, conotates the 'mighty wind', which was used to describe the coming of the Holy Spirit on the Pentecost. It would be impossible to overlook the final line of the poem ('Then cherish pity; lest you drive an angel from your door') without giving it a proper analysis. Pity, as Blake describes in "The Divine Image" is one of the divine forms of humans. Blake believes that no one person should be able to decide who or what should or should not be pitied. Therefore, everything should be pitied in order to retain the God-like qualities with we all already possess within us. ...read more.