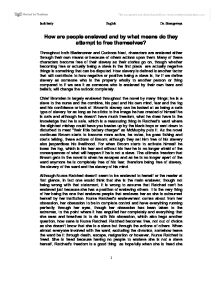 How are people enslaved and by what means do they attempt to free themselves? - A reflection on &quot;Blade Runner&quot; and &quot;Cuckoo's Nest&quot;

How are people enslaved and by what means do they attempt to free themselves? Throughout both Bladerunner and Cuckoos Nest, characters are enslaved either through their own means or because of others actions upon them. Many of these characters become free of their slavery as their stories go on, though whether becoming free or actually being a slave in the first place are actually negative things is something that can be disputed. How slavery is defined is another factor that will contribute to how negative or positive being a slave is, for if we define slavery as someone who is the property wholly to another person or thing compared to if we see it as someone who is enslaved by their own fears and beliefs, will change the outlook completely. Chief Bromden is largely enslaved throughout the novel by many things; he is a slave to the nurse and the combine, his past and his own mind, fear and the fog and his confidence or lack of. ...read more.

Although Nurse Ratched doesn't seem to be enslaved to herself or the reader at first glance, in fact one would think that she is the main enslaver, though not being wrong with that statement, it is wrong to assume that Ratched can't be enslaved just because she has a position of enslaving others. It is the very thing of her being the one that enslaves people that enslaves her as she is subsumed herself by her institution. Nurse Ratched's enslavement comes about from her obsession, her obsession to be in complete control and have everything running perfectly through her eyes, though her obsession has been taken to the extremes, to the point where it has engulfed her completely and everything that she sees and breathes is to do with this obsession, which also begs another question, how sane is Nurse Ratched. Ratched becomes free, not out of choice as she doesn't know that she is a slave but through the actions of others. When almost everyone involved with the ward, excluding the chronics, somehow leave the ward be it through death, escape, resignation or however, Nurse Ratched is freed. ...read more.

The freedom form this slavery is a negative freedom for when McMurphy lets his reputation down and realises that he is a slave to Ratched which is worse than being a slave to your own reputation, so in gaining one freedom McMurphy is then enslaved again by something worse. McMurphy's main enslaver, the ward and the nurse is the worst thing McMurphy can be enslaved by as it is the hardest thing to become free of as he is completely under the nurses control, and this thought is always in the back of his mind, McMurphy frees himself form this in the most negative way, death. Before McMurphy had his tragic realisation of being committed he seemed free, so therefore it is possible to say that McMurphy is only a slave if he believes he is. In Bladerunner Deckard is enslaved by his lack of ability to show his emotion. He is freed when he falls in love. Jack batty English Dr. Strangeways 1 ...read more.