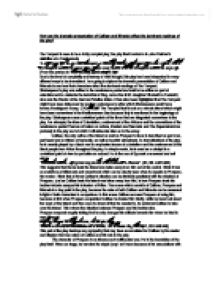 How can the dramatic presentation of Caliban and Miranda affect the dominant readings of the play? The Tempest is seen to be a richly complex play; the play itself conforms to John Fletcher's definition of a Tragicomedy. 'A tragicomedy is not so called in respect of mirth and killing, but in respect it wants deaths, which is enough to make it no tragedy, yet brings some near it, which is enough to make it no tragedy'. (From the preface to The Faithful Sheperdess [1610].) Due to the level of complexity and leeway of vivid thought, this play has been interpreted in many different ways to be dramatised. I am going to explore the dramatic presentation of Caliban and Miranda to see how their characters affect the dominant readings of The Tempest. Shakespeare's play was written in the renaissance period and said to be written as part of entertainment to celebrate the betrothal of King James the first's daughter Elizabeth to Frederick, who was the Elector of the German Palatine states. It has also been highlighted that The Tempest might have been influenced by another contemporary writer which Shakespeare would have known; Montaigne's Essay, Of Cannibals. The Tempest itself is set on a remote island which might have been somewhere in the Mediterranean Sea because Italy is mentioned in the beginnings of the play. Shakespeare uses contextual points of the times that are integrated somewhere in the play. ...read more.

Also when Caliban is speaking with Prospero, and when Prospero scolds him, he would look away as if to show that he cannot bare the maltreatment and refuses to acknowledge himself as uncivilised and unmannered. The setting of the stage will be minimal in terms of props, I think the stage should stay the same throughout to emphasise the remoteness of the island. The only props on set should be a fire in the midst of the stage, two seats and a mirror at the back of the stage. This will be for when Miranda looks into the mirror, to show that she is alone, and will also be used for when Miranda becomes physically aware of her beauty after Ferdinand arrives. The minimalist prop use is to emphasise that the only inhabitants of the island are Prospero and his daughter, Caliban and Ariel the spirit, the other characters will come afterwards, but the staple inhabitants are the aforementioned four. Also to project the idea of the characters being the only needed props for the play to progress, and to convey the complexity of the characters by contrasting it with a simplistic set. I am now going to explore the character of Miranda, the daughter of Prospero and the only female character in the play. She is fifteen years old, and has spent 12 years on the Island since Prospero was usurped as Duke of Milan and replaced with his brother Antonio. ...read more.

As for an alternative critical perspective, I think it influences the readings in the sense that they view it in their own interpretation, For example, a person with a strong political interest. That person would slant their views towards a political perspective and see Caliban's character as an oppressed inhabitant of the 'new world' which links into the idea of colonisation at the time. However, other interpreters seem to dismiss that suggestion and find that the play is based on a nature vs. nurture dispute. I have explored the characters of both Miranda and Caliban and their presence in the play. Caliban is one of Shakespeare's most exquisite characters, because of his complexity and multiple sided personas and the portrayal of Miranda as the ideal woman; virginal and obedient. I do not think that the presence of Caliban and Miranda alter the dominant readings of the play, because of its tragicomedy genre, the dominant themes of nature and nurture are reflected in the presence of the two characters because where Caliban reflects nature, Miranda is a product of positive nurture. Nurture can also be argued in defence of Caliban due to the nature of his mother as an evil witch. Thus, highlighting my opinion that the presences of these two extremely complex characters were part of the plan to create one of the greatest plays of all time. Bibliography I declare that I, Shaheen Rostom used the following resources to aid me with my coursework. Books 1 The Oxford Shakespeare-The Tempest-Stanley Wells/Stephen Orgel-1998 2 York Notes-The Tempest-David Pinnington-1998 Internet Websites 1 www.cliffsnotes.com 2 www.mala.bc.ca 3 http://research.haifa.ac.il/~theatre/rstmp01.html 4 www.shakespeare.org.uk 5 www.gradesaver. ...read more.