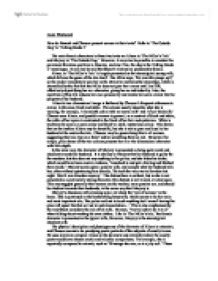 How do Bennett and Chaucer present women in their texts? Refer to 'The Outside Dog' in 'Talking Heads 2'.

Laura Westwood How do Bennett and Chaucer present women in their texts? Refer to 'The Outside Dog' in 'Talking Heads 2' The main female characters in these two texts are Alison in 'The Miller's Tale' and Marjory in 'The Outside Dog.' However, it may also be possible to consider the prominent feminine qualities in Absolon, and also Tina, the dog in the Talking Heads 2' monologue. It can also be said that Stuart's victims are presumably female. Alison, in 'The Miller's Tale' is largely presented as the stereotypical young wife, which follows the genre of the tale itself. The Miller says, 'fair was this yonge wyf,' so the reader immediately sees her as the attractive and beautiful stereotype, which is intensified by the fact that the Miller does not give her a name until line 258, effectively objectifying her as a character, giving her no individuality. Also, the repetition of this title reduces her own personality and makes her seem almost like the property of her husband. Alison's two-dimensional image is furthered by Chaucer's frequent references to colour, in this case, black and white. The colours usually describe what she is wearing, for example, 'a bamcloth eek as whit as morne milk' and 'of col-black silk.' ...read more.

He says, 'You're lucky I do it at all' when talking about washing his own clothes. Like in 'The Miller's tale,' the female character is presented as the typical wife, However, Marjory is the stereotypical obedient wife. The physical description and physiognomy of the character of Alison is extensive, and Chaucer seems to be parodying poetic portraits of the subjects of courtly lovers. He uses similes to compare Alison to the domestic and everyday where the courtly poets would have chosen exotic and valuable comparisons. For example, she is repeatedly compared to animals, such as 'Winsinge she was, as is a joly colt.' These descriptions, although they sometimes express positive qualities, such as her liveliness, may also portray a negative image of the 'yonge wyf.' For example, it may be inferred here that she is quite immature. Alison's outward appearance is concentrated on, and as a reader we do not learn a lot about her personality and characteristics, suggesting that she has little more than her looks in her favour. For example, 'as any wezele hir body gent and small.' This portrays Alison as being slim bodied in appearance. Chaucer presents women as being an object of sexuality, and the tale may be predominantly for the amusement of a male audience. ...read more.

However, like with Alison, as a reader we do not really agree with her actions, and may feel that she should be more of an active, rather than passive character. The character of Absolon is given very feminine qualities by Chaucer. His description is very precise and extensive in detail, for example, 'crul was his heer, and as the gold it shoon.' His description is rather unusual for a man, and strictly contrasts to the strong, manly portrait of the Miller. Absolon's character is largely mocked and treated as a figure of fun due to these effeminate qualities that he possesses. This again portrays femininity in a bad light, diminishing the importance and status of women in society, particularly in the period in which Chaucer wrote the tales. The fact that the dog in Bennett's monologue is female may also portray women in a negative manner. Dogs are typically viewed as being obedient towards their 'masters.' This suggests that the master-servant relationship should be extended to the husband and wife, as Marjory is in competition with Tina for her husband's recognition, 'That dog's not inside is she?' The victims in this monologue are also women, which again presents women as being 'helpless victims' and open to abuse from men. Again, the underlying theme of the passive nature of women is explored, as Stuart takes advantage of this. ...read more.