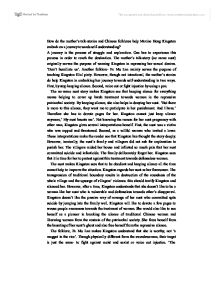 How do the mother's talk-stories and Chinese folklores help Maxine Hong Kingston embark on a journey towards self-understanding?

How do the mother's talk-stories and Chinese folklores help Maxine Hong Kingston embark on a journey towards self-understanding? A journey is the process of struggle and exploration. One has to experience this process in order to reach the destination. The mother's talk-story (no name aunt) originally serves the purpose of warning Kingston in repressing her s****l desires. 'Don't humiliate us'. Another folklore- Fa Mu Lan mainly serves the purpose of teaching Kingston filial piety. However, though not intentional, the mother's stories do help Kingston in embarking her journey towards self-understanding in two ways. First, by stop keeping silence. Second, voice out or fight injustice by using a pen. The no-name aunt story makes Kingston see that keeping silence for everything means helping to cover up harsh treatment towards women in the repressive patriarchal society. By keeping silence, she also helps in denying her aunt. 'But there is more to this silence, they want me to participate in her punishment. ...read more.

She frees herself from the haunting of her aunt's ghost and also free herself from the repressive silence. The folklore, Fa Mu Lan makes Kingston understand that she is worthy, not 'a maggot in the rice'. Though physically different from the swordswoman, their target is just the same- to fight against r****t and s****t or voice out injustice. 'The swordswoman and I are not so dissimilar. May my people understand the resemblance soon so that I can return to them. She understands that the eventual aim of the swordswoman and herself is similar, both are reporting 'a crime'. 'The reporting is the vengeance- not the beheading, not the gutting, but the words'. Once she recognizes that, she knows that she is not useless or just one more girl waiting to be sold. 'When I visit the family now, I wrap my American successes around me like a private shawl.' She is more sure of herself now. During her childhood years, she always heard sayings that degraded girls, ' Feeding girls is feeding cowbirds,' or 'There 's no profit in raising girls. ...read more.

However, she does learn to stand up in her life to challenge the r****t. When her boss called her 'n****r Yellow', she pointed out that ' I don't like that word', unlike the no-name aunt who endured all humiliation silently, she expresses her dissatisfaction. She also challenged the boss when the boss was being unreasonable. 'I refuse to type these invitations.' Though this is again not her mother's intention in telling her the folklore, Kingston displays courage in fighting against injustice by using a pen. She does not recede under the spite teasing of others. Kingston is not a timid woman who let this kind of inequality continue without people paying attention to them. She is a female avenger and she sees herself as a liberator from all these old attitudes of China. In conclusion, the intention of the mother telling Kingston's stories is somehow twisted. Kingston breaks from the restrain of tradition and work out a set of her own values. She librates from the patriarchal society. She is not submissive anymore,. She writes her desire and dissatisfaction and in turns opens the way for understanding herself better. ...read more.