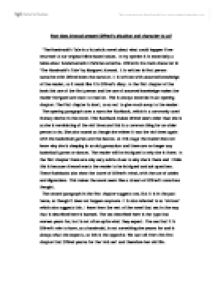 How does Atwood present Offred's situation and character to us in 'The Handmaid's Tale'?

How does Atwood present Offred's situation and character to us? 'The Handmaid's Tale is a futuristic novel about what could happen if we returned to our original bible-based values. In my opinion it is essentially a fable about fundamentalist Christian America. Offred is the main character in 'The Handmaid's Tale' by Margaret Atwood. It is written in first person narrative with Offred been the narrator. It is written with assumed knowledge of the reader, so it reads like it is Offred's diary. In the first chapter of the book this use of the first person and the use of assumed knowledge makes the reader intrigued and want to read on. This is always essential in an opening chapter. The first chapter is short, so as not to give much away to the reader. The opening paragraph uses a narrative flashback, which is a commonly used literary device in the novel. This flashback makes Offred seem older than she is as she is reminiscing of the old times and this is a common thing for an older person to do. She also sounds as though she wishes it was the old times again with the basketball games and the dances. ...read more.

There is also the fact that they are in a controlled atmosphere much like a child would be. However, there is also the more subtle clue in the fact that Offred is been looked after by aunts. Aunts are something that is most associated with the family and they are also stereotypically comforting. In this novel they are evidently not like this though, 'Aunt Sara and Aunt Elizabeth patrolled; they had electric cattle prods slung on thongs from their leather belts.' This is ironic, just as the Angels are. The chapter ends with a feeling of hope; that things could get better. I think Atwood has ended with this to give the reader hope and again intrigue him or her about how things are going to get better. The hope is given to us in two forms. The first is that they still have some kind of power, 'we still had our bodies'. This has s****l connotations, as it suggests prostitution. It also shows how desperate they are for human contact to resort to a trade off of their bodies. This desperation is again shown by the use of the word, 'fantasy'. A fantasy is in your imagination, which shows that Offred infact has little hope that it will happen in reality. ...read more.

She seems quite adaptable and easy going; Offred does not complain about her situation at all in this first chapter, she just seems to make the best of it. I think the reason Offred is like this is because of her dark sense of humour, which makes her situation almost bearable. This comes through more as the reader reads more of the novel. I think overall Atwood does not give a lot away about Offred in this first chapter, leaving an air of mystery and intrigue. However what it does tell us is very interesting and makes the reader want to read on. Overall the situation that Offred is presented to be in is shown to be mentally frustrating, as she is been treated as a child and is been deprived of s*x. It is also shown to be very frustrating as we can see a few contrasts between her new situation and her old one and they appear to be incomparably different. We do not find out much of Offred's character, but she seems adaptable with a subtle hint of a dark sense of humour. It is also important to remember how normal she seems, as in my opinion the main idea of this novel is that it could happen to you. ...read more.